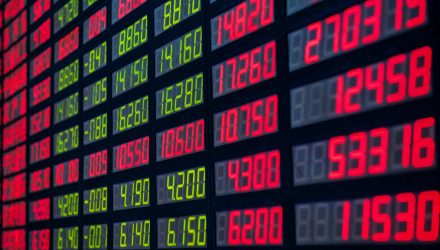 Stocks and index ETFs continue to exhibit instability as markets gave up earlier gains on Tuesday to close lower and are continuing to languish on Wednesday as House Speaker Nancy Pelosi and Treasury Secretary Steven Mnuchin struggle to complete their negotiations related to a fresh fiscal stimulus package.

The Dow Jones Industrial Average is essentially flat on Wednesday, after advancing slightly earlier in the session. The S&P 500 is also treading water to slightly lower on the day, while the Nasdaq Composite advanced 0.22%.

Tech stock Snap has been rocketing over 30% on stronger-than-expected results for the previous quarter, helping to lift other key players like Facebook and Google-parent Alphabet, which rose 4.7% and 2.9%, respectively.
Meanwhile, much of the market was bathed in red, with the healthcare sector and energy sector posting losses. The iShares U.S. Healthcare ETF (IYH) lost 0.79%, while the iShares Global Clean Energy ETF (ICLN) lost almost 3% Wednesday.

White House chief of staff Mark Meadows claimed that Pelosi and Mnuchin have been making “good progress” in their stimulus discussions, but they “still have a ways to go” before a successful deal is completed. Meadows told CNBC’s “Closing Bell” that negotiations will push through Wednesday, and that he would like to see “some kind of agreement before the weekend.”

A contentious, upcoming election is giving investors jitters. The lawmakers’ conversation Tuesday is part of what has become a last-minute effort to ink an agreement before the Nov. 3 election, following months of struggle to overcome fundamental disagreements related to further stimulus measures.

Stocks and index ETFs have waged a day battle as a result, with the last week going to the bears, and analysts are still concerned for markets.

“With big differences and little time, it seems unlikely that Pelosi and Mnuchin will reach a deal before the election. More importantly, even if a deal in principle is announced in coming days — this seems possible, but not likely — it looks very unlikely that it would pass before Election Day,” he added.

“The back and forth political discussions on the stimulus deal and continued election uncertainty give us extra justification for short-term market uneasiness,” said David Bahnsen, chief investment strategist at The Bahnsen Group, which oversees $2.5 billion in client assets. “Very few market actors actually doubt that some fiscal relief bill is coming. The question is purely when, and of what composition,” he added.