Stock Halts and ETFs: An Oddsmaker’s World and Challenge

The proliferation of ETF trading and investment usage is without question the most significant advancement and change to the asset management community since the advent of the ‘modern day’ mutual funds nearly 100 years ago. In less than 25 years, US Listed ETFs have amassed a staggering $4 trillion in AUM with the lion’s share of that being held in ETFs that are passive and track equity-based indices.

One of the more significant differences between mutual funds and ETFs is that the ETF shares are TRADED on an EXCHANGE, hence the moniker ‘exchange traded fund’.

Similar to other listed securities such as stocks, ADR’s and closed end funds, ETFs are subject to listing standards as well as regulatory trading requirements such as, but not limited to, ‘best ex’ and ‘price transparency’ (Reg-NMS), settlement rules (REG-SHO), securities regulations and of course TRADING HALTS.

The major exchanges and market participants have worked hard over the years to improve the reasons for and process by which securities should be halted. This is in an effort to protect investors from extreme market conditions. There are times when securities are halted due to unusual price gaps and some volume anomalies however it is far more common and customary for individual equities to halt when a ‘material’ news announcement is pending.

ETFs that track baskets of securities rarely have ‘news events’ that would require such a halt, however, the names they hold in the portfolio regularly ‘halt’.

What is also worth mentioning is the ‘why’ ETFs trade so efficiently in the secondary market throughout the trading day. ETFs are transparent. Every day each ETF discloses its holdings. Each and every day market makers who trade ETFs as liquidity providers download these ‘holdings’ for each ETF fund and in turn they calculate their very own proprietary ‘real time’ fair value of the fund. There are other names for this including the ‘INAV’ or ‘IOPV’. The ability to calculate these ‘real time’ fair values is dependent on real time pricing data of the underlying securities. For the balance of this commentary, I will be referring to ETFs back by US listed securities with trading hours that are contiguous with US listed ETFs.

So, what happens when one of the securities is halted? Market makers will no longer have a reliable source for the value of the underlying security. How do market makers continue to make markets in an ETF when one of the components is halted? This leaves them with the challenge of ‘solving’ for the price of the halted security that they would be comfortable taking risk. Often times this is even more challenging as the news could be very good or very bad.

Market demand and supply (trading levels) in the ETF are a very efficient way to gauge the implied or expected price move of an underlying security.

Tuesday afternoon was a textbook example of an equity halt with significant weight in several ETFs and the price change of the stock was expected to be large. The halted security was JNJ: Johnson and Johnson and the ETF that is most notable for this observation is XLV: HealthCare Select Sector SPDR. JNJ is % weight of XLV.

At 3:32pm Tuesday, JNJ was halted with ‘News Pending’.

What happens in the next 28 minutes was simply awesome, for the lack of a better adjective (the Cape Codder in me).

This is the kind of situation that gets my blood pumping because it’s not normal, however, it IS incredibly orderly and fair and something ETF market participants should be proud of.

After the halt in JNJ on Tuesday, XLV volume skyrocketed, and the price immediately deviated to a discount from fair value. This persisted for several minutes until such time that the news broke and was widely perceived as positive for the halted shares of JNJ. Remember, JNJ is halted with a last price of $129.13 and XLV is continuously trading in the market on heavy volume. 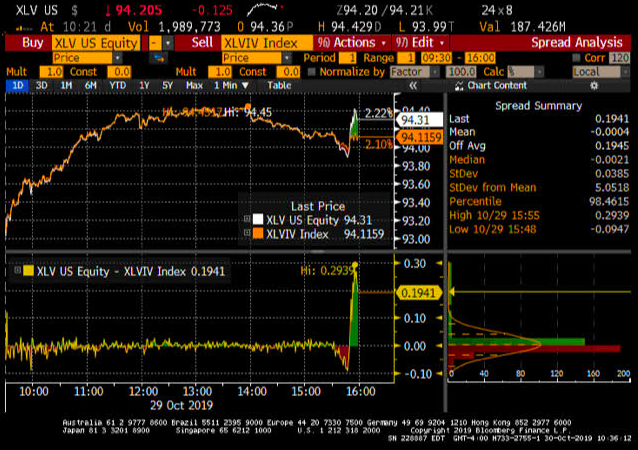 When the price of XLV dropped to a discount relative to the fair value it is presumable that investors ‘assumed’ the news would be negative and as a result sold shares of XLV, however, when the positive news broke, the price of XLV moved higher to a premium that would have implied a price move in JNJ of ~+3.5%.

Now, if you were to re-run this (chart 1) with Wednesday’s opening price of JNJ (+3.5%) the ‘noise’ created on the XLV versus it fair value (INAV) would have been heavily muted. 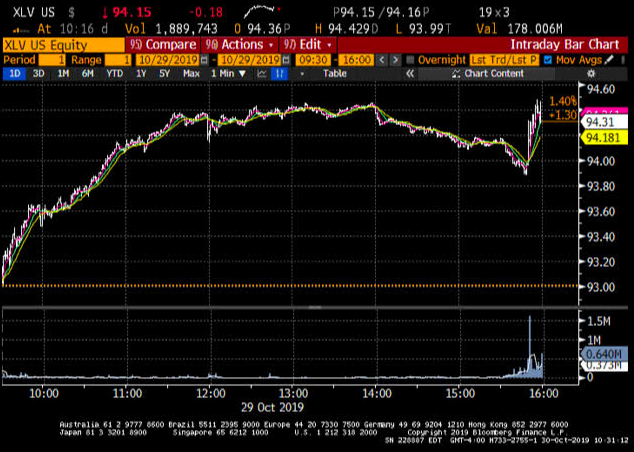 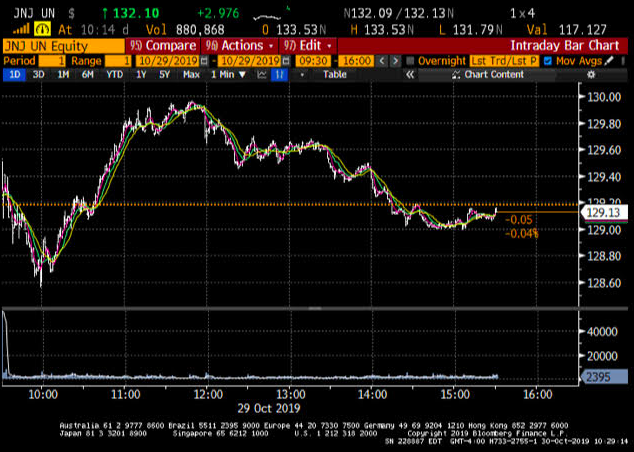 On Wednesday, JNJ opened in the premarket ~+3.5% and officially opened on the NYSE at $133.53 which was almost exactly where the implied price was Tuesday afternoon by way of the XLV trading activity.

My hat goes off to market makers and market participants for sourcing liquidity and efficient fair market valuation of an ETF that has an underlying component that is halted.

This is no easy task, and this goes to show how advanced market makers are in the valuation of ETFs and equities as well as the incredibly robust trading infrastructure of ETFs in the secondary market. Spreads in the XLV remained tight, volume exploded, liquidity was exceptional, and pricing was in line (fair) with the forward price of JNJ.

A feather in the cap for those of us who insist to all naysayers that ETFs work as designed.