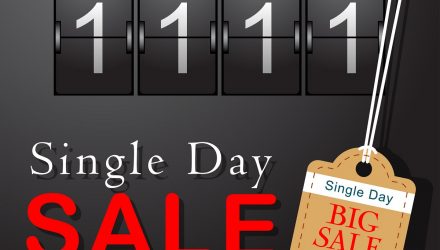 For investors who are concerned that the economy may be headed for a bust cycle, Singles Day sales performance numbers from Alibaba may help to thwart their fears.

Singles Day is a casual, anti-Valentine’s Day holiday celebrated in China for people who aren’t in relationships. The date of November 11 was selected because the date is written as four ones or singles.
Alibaba began offering Singles Day discounts in 2009 and has since transformed the day into a 24-hour bonanza of online shopping in China.
Other Chinese e-commerce platforms like JD.com and traditional brick-and-mortar stores also now take part in Singles Day, which has begun to gain traction outside China as well. Alibaba’s Southeast Asia subsidiary Lazada offers Singles Day discounts in Singapore, Malaysia, Indonesia, Thailand, and Vietnam. Now a variety of retail brands such as Nike and Brooks Brothers are offering Singles Day discounts on their websites in the United States.
“Singles Day is being held up as a bellwether of Chinese consumers’ willingness to spend in the face of a domestic slowdown,” wrote Jeffrey Halley, senior market analyst for Asia Pacific at Oanda, in a note Monday. But “deeply discounting prices always brings consumers out to play, no matter how bad the economy might be,” he added.

Albibab generated an incredible $13 billion in just one hour, a 32% increase from first-hour sales the year prior and nearly twice Amazon’s estimated sales during Prime Day in July. While Amazon does not reveal total sales from Prime Day, simply saying it was “once again the largest shopping event in Amazon history” with more sales than Black Friday and Cyber Monday 2018 combined, Internet Retailer estimated that Amazon generated $7.16 billion globally during the 48-hour period between July 15 and July 16.

Alibaba gathered more than $38.3 billion in sales on Singles Day, beating analyst estimates for upcoming Black Friday and Cyber Monday sales in the US. Now in its 10th year, the Chinese shopping bonanza continues to attract significant business and solidify Alibaba as a dominant force in the e-commerce industry.

“We continue to feel very confident about the growth potential of the economy,” Alibaba chief marketing officer Chris Tung told CNN in an interview. “We are pushing deeper towards the less developed areas of China, to reach more new online shoppers, so there’s a huge untapped opportunity there.”

Still, the rest of November could be a robust one for sales. Despite the dearth of Thanksgiving advertising in stores, according to Adobe Analytics, the post-Thanksgiving shopping weekend is expected to bring in $29 billion in online sales this year. In 2018, Black Friday and Cyber Monday reached all-time sales highs with $6.22 billion and $7.9 billion in online sales, respectively, Adobe reported.