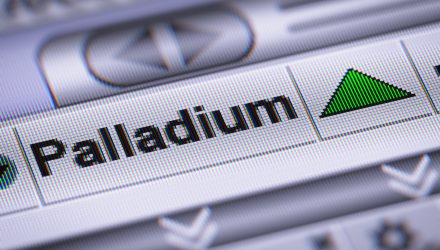 All that glitter is not gold—it’s palladium. The precious metal continues its reign over gold as the most expensive metal after it topped the $1,800 mark on Tuesday due to a supply shortage.

Palladium is primarily used in pollution-control devices and in Europe, where laws are strict, the demand for the precious metal is exceeding supply.

“That tightness in the palladium market continues to be the main driver,” Ryan McKay, a commodities strategist at TD Securities, said from Toronto. “You also have the better sentiment in the industrial metals complex. That also helps.”

As a result of the shortage, which is feeding into its increasing price, auto manufacturers are looking for lower cost alternatives like platinum. However, it may not happen anytime soon.

“There’s been concern that palladium’s hefty price could prompt automakers to find lower-cost materials, but so far that’s not happening,” the Newsmax report noted.  “Platinum, a cheaper sister metal used largely in diesel vehicles, is often mentioned as a possible alternative, but research has shown technological advances are needed before it can match the performance of palladium-based catalytic converters, according to Johnson Matthey Plc, which makes the devices.”

ETF investors who want to get in on the palladium action can look to the Aberdeen Standard Phys PalladiumShrs ETF (NYSEArca: PALL). PALL seeks to reflect the performance of the price of physical palladium, less the expenses of the Trust’s operations.

The fund is designed for investors who want a cost-effective and convenient way to invest in palladium with minimal credit risk. Based on Morningstar performance numbers, PALL is up 43%.