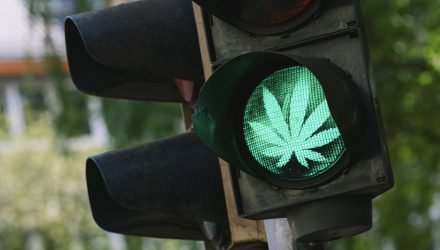 Marijuana ETF Reacts to Canopy Growth Acquiring Acreage for $3.4B

The deal gives Canopy Growth the right to purchase all of Acreage’s stock after cannabis is legalized in the U.S. In the interim, both companies will operate independently.

Canopy Growth is MJ’s third largest holding as of April 18 with a weighting of about 7 percent.

“Today we announce a complex transaction with a simple objective. Our right to acquire Acreage secures our entrance strategy into the United States as soon as a federally-permissible pathway exists,” said Canopy co-CEO Bruce Linton in a press release. “By combining Acreage’s management team, licenses and assets with Canopy Growth’s intellectual property and brands, there will be tremendous value creation for both companies’ shareholders.”

The deal is another win for the cannabis industry, but though a number of states have already given marijuana use the thumbs up for recreational or medical use, depending on the state, it is still prohibited by federal law. The Food and Drug Administration, in particular, prohibits the use of cannabis in consumer items like food and drinks.

Despite cannabis movers and shakers making these deals as of late, the challenge remains, however, with listing on exchanges. Some exchanges prohibit the listing of companies that engage in business activities they deem questionable.

“Until now, the Nasdaq has not been willing to list companies that have U.S. ‘plant touching’ cannabis operations,” said cannabis lawyer David Feldman, a partner at Duane Morris. “What’s interesting is that they didn’t tie this to Nasdaq, they tied it to legalization.”

“It is interesting that they are limiting it to legalization, rather than completing the acquisition when TSX and Nasdaq are prepared to allow the listing,” he added.

Last month saw the announcement of Aurora Cannabis, MJ’s top holding, scoring billionaire activist investor Nelson Peltz who will serve in a strategic advisory role for the company. According to an Aurora press release, Peltz will “work collaboratively and strategically to explore potential partnerships that would be the optimal strategic fit for successful entry into each of Aurora’s contemplated market segments.”