Vanguard ETF launches are a relative rarity among the top asset managers. Despite being the second largest U.S. ETF provider, Vanguard did not roll out any ETFs in 2019 and only one of its ETFs began trading in 2020. With the launch of VUSB on April 5, just two of the firm’s 82 ETFs (2.4%) came to market since the end of 2018. In contrast, 62 of top provider BlackRock’s current 387 U.S. ETF lineup (16%) were listed since 2019, including two low carbon ETFs that came to market last week and already have $1.8 billion in combined assets due to strong institutional investor backing. 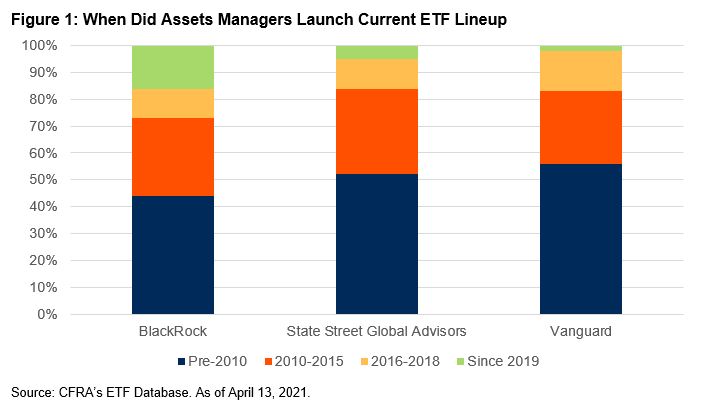 Vanguard is tapping into a popular ETF theme with its active ultra-short bond fund. While actively managed ETFs comprise a small 3.5% of the $6.1 trillion U.S. listed ETF market, highly conservative income funds are among the more popular active ones. Indeed, JPST and MINT manage a combined $32 billion in assets and BlackRock, First Trust, Invesco, and Janus are among the other asset managers with $1 billion-plus active ultra-short bond ETFs. CFRA’s ETF and mutual fund ratings are currently rewarding fixed income funds that incur more elevated risk given the low-rate environment, but we see merit in these ultra-short offerings.

VUSB is run by the same team as the firm’s $18 billion actively managed mutual fund, VUSFX, but is not a share class of the portfolio as commonly occurs with Vanguard index-based products. VUSB incurs the same average duration of 1.0 years and charges the same modest 0.10% fee as VUSFX, but less than larger ETF peers JPST and MINT. VUSB just crossed the $100 million milestone this week, a mere few days after launching with $15 million.

Rich Powers, Head of ETF and Index Product Management at Vanguard, explained to CFRA in an exclusive interview that the ultra-short ETF was long at the top of the product wish list with advisor clients, given the ubiquitous nature of commission-free ETFs on brokerage platforms. However, he noted that individual investors have been early adopters.

We think Vanguard’s entry will help to further boost demand for the ultra-short ETF investment style. Given how low the yields are for money market funds, we think some investors are willing to take on slight interest rate risk for the chance of some extra income. These investors will seek out asset managers they are familiar with for active fixed income strategies.

Could Vanguard launch additional active fixed income and equity ETFs soon? Powers was tight-lipped to CFRA about the future, but said the firm has been doing research on rounding out its ETF lineup to include more strategies available currently to only mutual fund clients. For example, the firm offers many actively managed mutual funds, such as Vanguard Dividend Growth Fund (VDIGX) and Vanguard High-Yield Corporate Fund (VWEAX), which we believe would garner strong interest in an ETF wrapper by advisors and retail investors, whether offered in a traditional transparent way or using the newer semi-transparent structures that were launched in the last year. Given Vanguard’s style of launching just one or two new ETFs a year, something it did every year between 2011 and 2017, we think patience for such active ETFs will be required.

As the second largest ETF provider in the U.S., Vanguard has the scale and brand strength to gather assets relatively quickly and support investor education to spur demand for not only its own new products but those of peers. We expect VUSB and the broader ultra-short bond ETF style to continue to see demand in 2021.