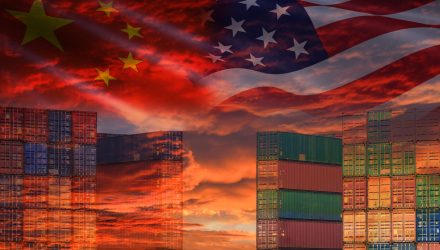 Is the worst over for market volatility from the U.S.-China trade war? The higher moves in the major indexes could mean that the capital markets are beginning to consolidate after weeks of heavy oscillations that sent the volatility index through the roof.

“As China is losing patience with President Trump’s strategy, I think the market is repricing until we get more clarity on trade,” said Jeff Zipper, managing director of investments at U.S. Bank Private Wealth Management.

The U.S.-China trade war reached new heights earlier this month when China unveiled new tariffs on $75 billion worth of U.S. products. This was a countermeasure to U.S. President Donald Trump’s announcement that he would raise tariffs on specific Chinese goods starting September 1.

In the meantime, Treasury yields continue to flash recession signals with an inverted yield curve. Inverted yield curve and trade wars have been spurring investors to move towards more safe haven assets like bonds. As such, bond prices have been moving higher while yields have sunk to fresh lows.

Per a CNBC report, “the closely-watched spread between the 10-year Treasury yield and the 2-year rate is trading around its lowest level since 2007. This is called a yield-curve inversion. Investors fear it because it has historically preceded a recession. Meanwhile, the rate on the benchmark 30-year Treasury bond sank to an all-time low.

“If central banks sit back and do nothing, and the Trade War persists, we go into recession. This is not likely,” said Nick Raich, CEO of The Earnings Scout, in a note. “Central banks remain ready, willing and able to extend the economic cycle taking us into probably something like inning #24.”

The move to safe havens is helping other asset classes like precious metals. Investor in need of a safe haven for their capital can look to gold exchange-traded funds (ETFs).

For many investors, gold is the standard in precious metal investing, which has become more accessible than ever thanks to options via an exchange-traded fund (ETF) wrapper like the SPDR Gold MiniShares (NYSEArca: GLDM).

Due to this negative correlation, large downturns in the broad market may not affect commodities. By investing in a gold ETF like GLDM versus actual gold, investors can also reap the benefits of an ETF like its tax efficiency.

For GLDM investors specifically, the ETF offers the following benefits: