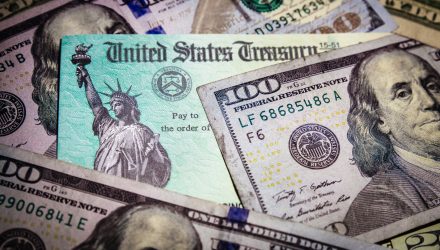 Longer-term Treasury bonds surged to their highest prices in over a month on Thursday, even as stocks continued to rally to fresh all-time highs.

After languishing for the last few weeks, following a tumble lower, the 10-year and 30-year Treasurys, which move inversely to yields, are making big moves on Thursday.

The 10-year Treasury climbed 0.56%, while the 30-year Treasury gained 1.33%, barely breaking above the March 11th highs, which ushered in a period of more downside and higher yields.

Interestingly, since it is a widely held belief among investors that inflation is disturbing for the bond market, some investors are surprised to see yields move lower, as the U.S. inflation measure rocketed to its highest level since 2018.

Gondeck says the lack of any additional selling could indicate that markets were already anticipating inflation measures to increase in the spring of 2021, essentially that the numbers were priced in.

The 10-year Treasury yield fell to 1.63%, after trading as high as 1.70% earlier in the day. The fall in yields was beneficial for technology and growth stocks, which tend to suffer as yields rise.

The consumer price index surged 0.6% last month, driving the annual rate of inflation over the past year to 2.6%, from 1.7% in the prior month.

Yet, even prior to the March data, inflation projections were already lofty. The 10-year breakeven rate, sometimes viewed as a market-based measure of inflation prospects, was 2.33% on Monday, close to its highest levels since 2013.

“Everyone knew prices were going to jump and it will take a string of months of significant surges with prices to get a bigger reaction in the market,” Edward Moya, Senior Market Analyst, The Americas, at OANDA wrote in a note. “The rise in Treasury yields will remain capped until we find out if the upcoming pricing pressures over the next few months are outsized.”

Another factor, however, could be that the Food and Drug Administration and the Centers for Disease Control and Prevention said they would halt the use of Johnson’s coronavirus vaccine recently, something that could spook investors and markets into projecting a delay in the economic recovery.

“There’s a fair bit of crosscurrent in the market with the announcement that the J&J vaccinations have been paused,” said Kelsey Berro, a fixed-income portfolio manager at JPMorgan Asset Management, in an interview.

It is still difficult to say how inflation will affect the bond market and interest rates will play out going forward, as the Federal Reserve has largely dismissed what they anticipate to be an ephemeral overshoot of inflation, making it challenging to say when the central bank may opt to increase interest rates.

“The real question remains to what extent these figures prove transitory, as the Fed expects, or something longer lasting and we won’t know that until later this year,” said John Leiper, Chief Investment Officer at Tavistock Wealth, in emailed comments.

Meanwhile, investors who see Treasury yields falling and bonds climbing again could look to invest in the ProShares Ultra 20+ Year Treasury (UBT), which is up over 4% on Thursday.