You are at:Home»Equity ETF Channel»Japanese ETF Net Inflows Continue To Climb In September 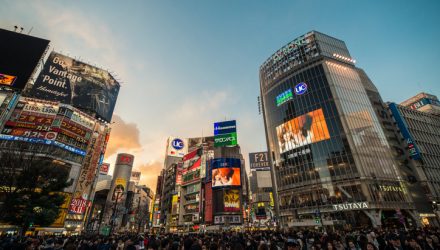 According to ETFGI’s September 2019 Japanese ETFs and ETPs industry landscape insights report, assets invested in the Japanese ETFs/ETPs industry have increased by 4.8%, from US$355.09 billion at the end of August, to a record US$372.00 billion.

“The S&P 500® gained 1.9% during September despite slowing economic growth, ongoing trade disputes, and a presidential impeachment inquiry. Shifting the focus to the S&P Developed ex-U.S. BMI, the index was up 3.0%, as 23 of 25 countries gained during the month; the highest gainer in the month was Korea (up 6.4%), while Hong Kong continued to decline (down 0.8%). From an Emerging Markets standpoint, the S&P Emerging BMI gained 1.4%, with 15 of the 23 reporting gains. Globally, equities reclaimed prior month losses, gaining 2.1%, as measured by the S&P Global BMI (38 out of 50 countries reporting gains).” According to Deborah Fuhr, managing partner, founder, and owner of ETFGI.