It’s Time to Invest in This New Type of Stock

I’m going to start off today by saying something controversial. It is not that hard to make big gains of 200%, 300%, 400%, or more in the stock market. In fact, it’s pretty easy, if you’ve got nothing but time.

You can buy big, safe dividend paying stocks like Berkshire Hathaway (BRK.B) or Johnson & Johnson (JNJ), and hold them for years. BRK has climbed 170% in the past decade. JNJ is up 120%.

If you’ve got nothing but time, you don’t even have to bother picking individual stocks to double your money. You could simply buy and hold the S&P 500. US stocks, on average, have doubled every eight years for the last 140 years.

So, if you’ve got nothing but time to build wealth, feel free to discard this essay. Because I’m going to show you a simple, reliable way to invest that skyrockets your odds of doubling or tripling your money in months, instead of years or decades.

The “catch” is that you can only use this strategy every few years. Fortunately, we just entered one of these golden windows. Let me explain.

To double or triple your money in months, all you have to do is apply these three magic words

Identify something BIG and NEW. And invest in it EARLY. Here’s an example: remember back in 2018 when the US government effectively legalized marijuana? This was a huge deal: A whole new industry was born practically overnight!

It allowed ordinary folks to invest in marijuana companies for the first time ever. Right away, “pot stocks” jumped to the moon. During the 18-month window when these stocks were “new,” profits were being handed out on a silver platter.

Do you remember when cryptocurrencies were red hot a couple of years ago? In 2017, Bitcoin took markets by storm. I had dinner with a well-known Dallas hedge fund manager early that year. Bitcoin’s price had doubled over the previous six months, surging to $1,200. But he looked me in the eye and said: “This is a totally new phenomenon, I guarantee we’re only getting started.” 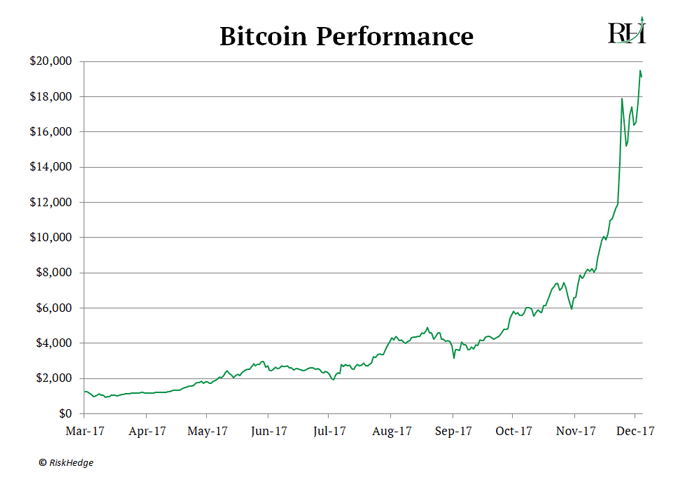 Bitcoin literally handed out decades worth of gains in just a few months! And the key was that crypto was new. The vast majority of American investors were hearing about it for the first time.

Before marijuana and cryptos, you have to go back a decade to find the last time a new class of stocks hit the market. That’s when Salesforce (CRM) figured out software could be sold over the internet as a subscription. This was a “eureka” moment for many American businesses. They discovered you can make a lot more money charging subscriptions to software instead of a one-time fee.

Software as a service (SaaS) stocks were born, and they rocketed in a flash. Splunk (SPLK) shot up 245% in a little over a year. Twilio (TWLO) handed early investors triple digit gains in less than seven months. AppFolio (APPF) jumped 118% in less than six months.

These new stocks are growing even faster than the pot stock, crypto, and SaaS booms before them. In fact, respected Silicon Valley CEO Aaron Levie recently said: “There is literally no playbook for these kinds of numbers at this scale.”

But when you find a hypergrowth stock that’s doing something entirely NEW, you’ve found something very special: a stock with blue-sky potential to rise much faster than any ordinary stock could.

Remember, “new things” in investing only come around once every five years or so. If you seize the moment, and pinpoint the right hypergrowth stocks, you can collect a decade worth of gains in less than a year or two.

Get my report “The Great Disruptors: 3 Breakthrough Stocks Set to Double Your Money”. These stocks will hand you 100% gains as they disrupt whole industries. Get your free copy here.