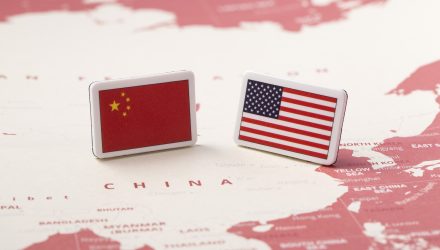 Aside from more tariffs, the US-China trade war is also producing one byproduct it didn’t intend from the outset–growing Chinese nationalism. This could put China-focused ETFs on watch as the second-largest economy looks to become less reliant on the U.S. to shore up its economy.

In addition, China is willing to exercise patience as opposed to rushing into a trade deal with the U.S.

“Don’t forget … Chinese (are) very patient historically, they’ll wait it out, they’ll play lots of different angles. They’re going to try to hang in there, waiting for President (Donald) Trump to come to them,” said Max Baucus, a former American ambassador to China.

“There’s a feeling that nationalism is getting a little stronger … I think that’s also emboldening President Xi,” said Baucus, who served as ambassador to China from February 2014 to January 2017, under former President Barack Obama’s administration.

China announced plans to impose additional duties on $75 billion worth of American goods on Sept. 1 and Dec. 15. In response to these latest measures, President Donald Trump tweeted that his administration would also raise tariffs on $550 billion of Chinese imports.

“From China’s perspective, China … has a hard time trusting President Trump, who keeps changing his mind. He pulls out the rug from under his negotiators … The Chinese are afraid to reach a deal with this president — it may not last, they can’t count on it, he might change his mind again,” Baucus said.

“If there’s another administration, they think it might be better in the sense that it’d be more predictable, there’d be less uncertainty. It’d be more standard negotiations,” he continued.

Additionally, investors should give the VanEck Vectors China AMC China Bond ETF (NYSEArca: CBON) a look. CBON seeks to replicate the price and yield performance of the ChinaBond China High-Quality Bond Index, which is comprised of fixed-rate, Renminbi-denominated bonds issued in China by Chinese credit, governmental and quasi-governmental issuers.