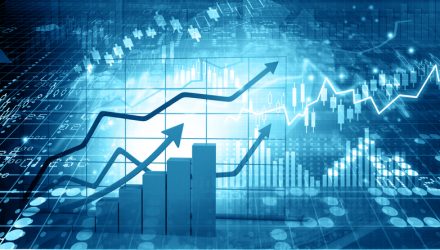 VTI tracks the CRSP U.S. Total Market Index, which includes almost every liquid U.S. stock on the market. VTI offers a notable alternative to standard S&P 500 index funds at a time when equities are perking up.

Being the start of the year, Jaffe wonders if this is a market call or a trending play to be cautious. Lydon responds by stating how trends are up, with positive momentum carrying into the new year. That said, the reason comes down to more than just S&P 500 and mid-caps.

VTI will benefit small-caps as well. While large-caps have outperformed the others for the past five years, over time, it’s usually the other way around. So, if the thought is how things will revert to the mean, but there’s no desire to sell the large-cap or S&P position, this fund is perhaps a way to swap it out. This is a good way to come into the new year with more exposure to areas of the market that haven’t seen too much recognition.

“The U.S. has done really well from an economic standpoint for the last ten years,” Lydon states. “It’s been one of the strong areas of the world. We’re not saying run away with it, but just make sure to get full representation, and that’s what VTI does.”

VTI As A Bedrock Holding

As far as this ETF being a bedrock holding, the question arrives of how much intention there is in making a fund with this brand name a significant factor for portfolios. Lydon notes how investors do look at their portfolios at this early time in the year and make considerations concerning how U.S.-focused to keep things.

Lydon describes VTI as a “Classic Vanguard ETF,” as the expense ratio is three basis points. So when considering this and already owning mutual funds that may have provided an unwelcome year-end distribution, perhaps the look becomes seeing something relatively plain and low-cost, where an investor can receive complete representation in U.S. stocks., this is an ETF to consider.

The fund serves as a great way to show the strength of ETFs in a general sort of way. However, there is twice as much money in equity mutual funds than there are in ETFs asset-wise. When asking why that money hasn’t come over, Lydon explains how it’s due to people tending not to want to change.

Talking about change, the question of whether VTI would be something allowing investors to rely on as a new foundation for different ways to push money around, Lydon notes how it could work as a replacement or an opportunity. It’s great to see broad market participation, and VTI does provide the chance to help with this.

“If you haven’t done trend marketing before and you’re worried about the market being long in the tooth, you could always begin doing some trend-following with this type of ETF and just trade it on a 200-day average,” Lydon explains.

Lastly, Jaffe asks if there is a risk for VTI to be an old-fashioned, market cap-weighted portfolio. Lydon answers by stating how there’s always risk because there’s always market risk. It’s not that VTI will be better than anything else, because it is so broad market. However, if the trend works for an investor, there’s no reason to consider selling out a portfolio today, even if it seems like the right idea.

No evidence suggests a current weakening in the economy. However, things can change in three months, so it’s always good to keep an eye open.