You are at:Home»Equity ETF Channel»Coca-Cola Saps Some Fizz From Staples ETFs 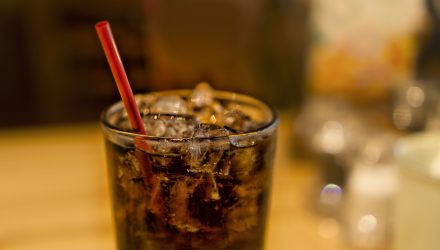 In midday trading Thursday, Coca-Cola was down more than 7%, on track for its worst intraday performance in over a decade. Coca-Cola is XLP’s second-largest holding at a weight of 11.23%.

“The soft drink giant reported fourth-quarter earnings that met expectations, but it forecast that 2019 earnings per share could rise or fall by 1 percent — meaning less than the $2.08 per share it earned in 2018. Wall Street’s consensus projects were earnings of $2.23 per share in 2019,” reports CNBC.

With the business cycle potentially slowing next year, defensive sectors could be embraced by investors. Consumer staples, health care and industrial sectors typically outperform during the so-called slowdown period of a business cycle when economic growth starts decelerating but remains positive, the economy runs beyond its full capacity and monetary policy becomes restrictive.

Coca-Cola “has been battling currency headwinds, which it said hurt its fourth-quarter earnings by 10 percent. Rising import and transportation costs last year forced it to raise prices on its soft drinks in North America,” according to CNBC.