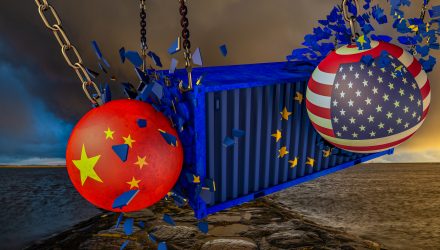 Even with the challenges facing its economy, such as slowing growth, China is prepared to exercise patience in what could be a long, protracted trade war. While the second largest economy is brimming with confidence, it might be wise for investors to give China-focused exchange-traded funds (ETFs) another look.

The U.S.-China trade war is now 18 months in and per a CNBC report, “China is preparing for a battle that could be as long as the U.S.-Japan trade war in the 1980s that lasted more than a decade, according to Yi Xiong, China economist at Deutsche Bank.”

In short, China is looking to play only one way—the long game.

“We think China is neither aiming to quickly reach a trade deal, nor trying to hit back at the U.S. as hard as it can,” said Yi Xiong, China economist at Deutsche Bank. “China’s current strategy likely has a long time horizon embedded in it. The time horizon may also go beyond the life cycle of the current U.S. administration.”

In the meantime, China is doing whatever is necessary in order to decrease its reliance on the U.S. For example, the official newspaper of the Chinese Communist Party, the People’s Daily, is publishing articles that showcase the improving relations with Thailand, Japan, South Korea, and Latin America.

Furthermore, domestic efforts are taking place to shore up its development in technological advancements.

China on Tuesday issued 20 directives to boost consumption, in an effort to further tap domestic market, not putting so much emphasis on trade talks. China’s economy is increasingly driven internally, it’s more and more difficult for the US to press China to make concessions.