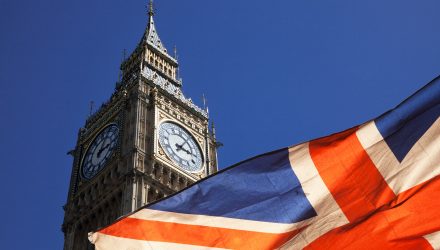 Even against the backdrop of contentious Brexit negotiations, the iShares MSCI United Kingdom ETF (NYSEArca: EWU), the largest U.K.-related exchange traded fund (ETF) listed in the U.S., is up more than 14% this year.

Following news that European Union (EU) granted the U.K. a lengthy extension to finalize its divorce from the EU, EWU saw unusual options activity on Thursday.

“Specifically, the exchange-traded fund (ETF) has seen roughly 5,000 puts change hands — five times the average afternoon pace. About half as many EWU calls have crossed the tape so far, but that’s still four times the average rate of call volume for the fund. Both call and put volume are set for the 98th percentile of their annual range, should the current pace hold through day’s end,” according to Schaeffer’s Investment Research.

The U.K. now has until October 31 to finalize its departure from the EU, but some market observers believe that extended deadline is merely delaying the inevitable: the departure of Prime Minister Teresa May.

“May had promised to step down if her deal was approved,” reports CNBC. “She has already survived a vote of no confidence from within her own party last December (and technically another vote cannot be held within 12 months) but she could be forced to go if there is a dramatic revolt against her.”

Thursday’s options activity in the $2.33 billion EWU was a departure from the norm.

Thursday’s “bullish betting represents a change of pace for EWU options traders. At the International Securities Exchange (ISE), Chicago Board Options Exchange (CBOE), and NASDAQ OMX PHLX (PHLX), the stock’s 10-day put/call volume ratio sits at 3.94, indicating speculators have bought to open nearly four EWU puts for every call in the past two weeks. What’s more, this ratio is in the 74th percentile of its annual range, pointing to healthier-than-usual put buying of late,” notes Schaeffer’s.