You are at:Home»Equity ETF Channel»Biotech ETFs Could See More Inflows 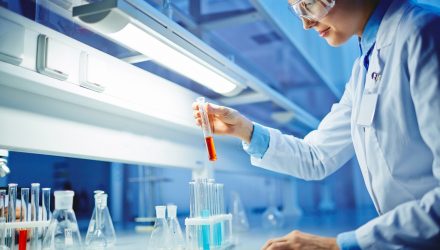 After languishing in the latter stages of 2018, the iShares Nasdaq Biotechnology ETF (NASDAQGM: IBB), the largest biotech exchange traded fund by assets, and the SPDR S&P Biotech ETF (NYSEArca: XBI) are sporting double-digit gains early in 2019. Some analysts see the potential for these biotech ETFs and other to lure more assets from investors.

Despite XBI’s 2019 bullishness, “the ETF is still down about 15% from its third-quarter levels. That means that the huge outflows in the fourth quarter still have more room to reverse, and XBI and IBB—both up double-digits year to date—could see more money piling back in,” reports Teresa Rivas for Barron’s.

“Jefferies’ Michael Yee writes that third-party data shows that the fourth quarter saw not only the biggest actively managed fund outflows in the biopharma space in 15 years, but outflows that were double the biotech bear market of 2016,” according to Barron’s.