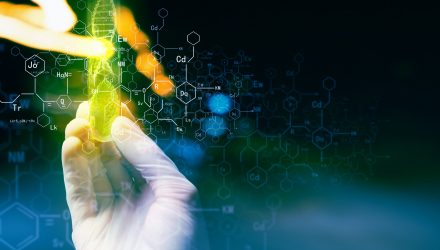 Shares of Biogen Inc. rocketed higher on Tuesday, headed for their strongest performance in 20 years, after the biotechnology company surprised investors by stating that its Alzheimer’s treatment was prepared to start the regulatory approval process, as well as from third-quarter earnings that handily beat expectations.

The biotech company said its decision to move forward with the approval of aducanumab, an treatment for early Alzheimer’s diseases was determined after the drug met the primary endpoint of a Phase 3 Emerge study, and after consulting with the U.S. Food and Drug Administration.

This is a reversal from the company’s statement last March when it said it would discontinue the trials after lackluster results. Over $15 billion in market value was wiped after the company said it wouldn’t be moving forward.

The iShares NASDAQ Biotechnology ETF (IBB) rallied more than 3% at its high on Tuesday on the news, which represented its best daily gain since January 7, as Biogen powered the ETF higher.

Wall Street was also shocked by the Biogen’s announcement.

“Today’s announcement to submit for approval comes as unexpected,” Wedbush analyst Laura Chico wrote in a note to clients. Guggenheim’s Yatin Suneja said “this is an interesting development, and certainly unexpected.” And Alethia Young from Cantor Fitzgerald said she was “very shocked.”

Biogen’s rally aided other biotech names as well, including Vertex Pharmaceuticals, which gained 4%, as well as Gilead, Celgene, Regeneron, and Endo International, all of which climbed more than 1% on the news.

The news is particularly significant, as the drug would be the first of its kind in the Alzheimer’s market, which is worth billions of dollars. Still, given the drug trial’s history, the analysts remain somewhat skeptical.

“While the headline sounds positive (and very well could mean the company has an Alzheimer’s drug), the news today alone does not guarantee approval and questions remain,” Mizuho analyst Salim Syed wrote in a note to clients. He has a neutral rating on the stock, and $235 target.

Morgan Stanley’s Matthew Harrison agreed, saying that there are “a range of questions that will need to be addressed for investors to gain confidence in this strategy.”