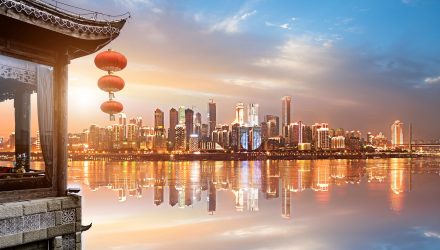 The iShares China Large-Cap ETF (NYSEArca: FXI), one of the largest China exchange traded funds listed in the U.S., is higher by nearly 9% this year, but that upside could be capped over the near-term unless the fund can push through some important resistance areas.

Recent data points indicate traders are buying some marquee ETFs tracking developing economies. After the recent pullback in the equities market, bargain hunters may look to beleaguered emerging market stocks and region-related ETFs for value. Many of those ETFs feature China as the largest geographic exposure.

Easing trade tensions between the U.S. and China, the world’s two largest economies, are bolstering the fortunes of Chinese stocks and ETFs such as FXI this year.

“The big-cap Beijing tracker started the year by revisiting its late-October lows near $38 — but then quickly roared higher to revisit familiar resistance in the $43.50 area, which has capped the stock’s rally attempts since last June. From its Jan. 3 closing low to its Feb. 5 closing high, FXI gained roughly 14%,” according to Schaeffer’s Investment Research.

There are some turning more bullish on the China outlook. Goldman Sachs Group Inc. strategist Rocky Fishman offered a more optimistic take on China trade in a note last week, suggesting bargain hunters could look to cheap FXI calls in order to position for a positive resolution to the tariff dispute.

“From a long-term chart perspective, the ETF’s 52-week moving average is hovering right at $43.59. This trendline — equivalent to a year’s worth of trading — acted as support on a late-2016 pullback, and the ensuing bounce carried FXI all the way up to the aforementioned January 2018 peak (which was roughly a 10-year high). However, the 52-week moving average was breached in June 2018 amid high-volume selling, and could now serve to reinforce resistance in the $43.50 region,” notes Schaeffer’s.