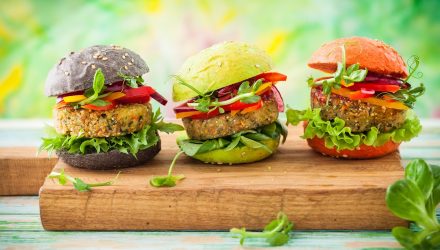 Beyond Meat (NASDAQ: BYND) has had quite a year so far, up as much as nearly 9.5 times its IPO price, to its current value of roughly $152 a share. J.P. Morgan analyst Ken Goldman even upgraded BYND stock from its previous rating of “Neutral” to a new rating of “Overweight” in a recent note. But BYND’s product may have another value as well padding investors’ wallets: the ability to potentially retrain consumer tastes.

Soon after Beyond Meat created its first “beef” product made from plant proteins, which later transitioned into its now-famous Beyond Burger in 2016.
Whole Foods CEO John Mackey does not see Beyond Meat or its rival, privately held company Impossible Foods, as having offerings that are particularly salubrious, going as far to say about them on CNBC: “I don’t think eating highly processed foods is healthy. I think people thrive on eating whole foods,” Mackey says. “As for health, I will not endorse that, and that is about as big of criticism that I will do in public.”
However, one benefit that Mackey does claim Beyond Meat provides is the ability to transition consumer tastes to something different, which opens the door to something healthier as well.
“A lot of people say … that [plant-based] meat is a transition food, meaning it’s a way for [people]to begin to re-educate [their]palates”; it’s a good first step in weaning people off of meat products, Mackey says.
Mackey also believes, like many others, that plant-based meats are a more ethical choice and are better for the environment than regular meat, something that has been proven by research.
According to a study commissioned by Beyond Meat with the Center for Sustainable Systems at the University of Michigan, a plant-based burger creates 90% less greenhouse gas emissions, requires 45% less energy, has 99% less impact on water scarcity, and 93% less impact on land use than a 1/4 pound of traditional U.S. beef.
No matter which way you stand on the issues, few can argue that since BYND went public back in May, at $25 a share, it has made quite an impact on all types of consumers and investors.
For more market trends, visit ETF Trends.