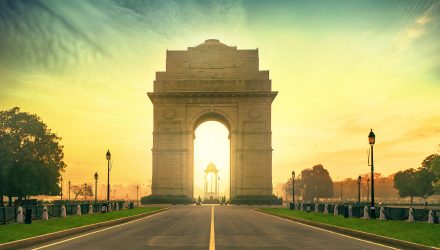 5 India ETFs to Watch as Country Continues to Cut Rates

In the U.S., the expectation is that more rate-cutting by the Federal Reserve will take place through the end of 2019, but in the case of India, are further rate declines being instituted to no avail? The country’s central bank installed its fifth rate cut in 2019 in an effort to resuscitate growth.

Per CNBC, the “Reserve Bank of India (RBI) lowered the repo rate by 25 basis points to 5.15% with five members of its Monetary Policy Committee voting in favor, versus one who backed a 40 basis point cut. The decision came against a backdrop of weaker growth, a resurgence of financial stability risks and a surprise fiscal stimulus in the form of a recent corporate tax cut.”

Growth in India has been declining for five consecutive quarters, allowing China to overtake it in the month of May as the fastest-growing economy based on data from the International Monetary Fund (IMF). Currently, inflation in the India stands at 3.2% with 4% being the RBI’s target rate.

One of the main reasons for stagnant growth has been the banking sector where a credit slowdown is taking place.

“One possible reason for this constraint is the health of India’s banking and financial sectors, which remains weak,” said Shumita Deveshwar, director of India research at TS Lombard. “A shrinking savings rate and a large public sector borrowing requirement are keeping borrowing costs for banks elevated, and many banks are still dealing with relatively large amounts of bad debt on their books.”

“Under-reporting of bad loans evidently continues to be a risk despite the RBI’s actions over the past few years to make the balance sheets of banks more transparent and to stop ever-greening of loans,” she added.

As for India-focused exchange-traded funds, here are five to watch based on size (total assets):

At the top of the heap is the iShares MSCI India ETF (CBOE: INDA). INDA seeks to track the investment results of the MSCI India Index composed of Indian equities, which measures the performance of equity securities of companies whose market capitalization, as calculated by the index provider, represents the top 85% of companies in the Indian securities market.