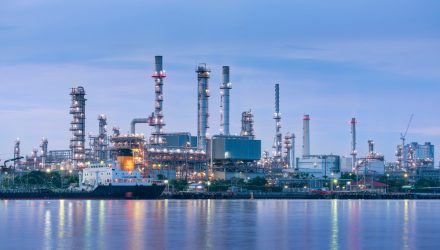 Energy-related ETFs lagged behind the market to kick off the new year, with the energy sector on pace for its worst January turnout since 2008.

The Energy Select Sector SPDR Fund (NYSEArca: XLE) has already been underperforming the broader market as it dipped 8.1% so far in the new year, compared to the S&P 500’s 1.7% gain.

The energy sector has fallen behind as crude oil prices weakened on concerns over the global economy as the coronavirus outbreak in China threatens a major component in the world economy.

Dragging on the energy sector, Brent crude, the global oil benchmark, has declined about 14% this year and is moving toward its worst January since 1991, the Wall Street Journal reports.

The coronavirus epidemic has already cut down jet-fuel consumption as several airlines reduced or grounded flights to China and the U.S. warned Americans to not travel there.

While the short-term uncertainty has crimped the sector, energy stocks have been suffering under a long-term trend of sliding oil prices since 2014. Even as crude oil prices gained ground, rising costs still reduced energy sector profits.

Among the worst performers, oil-field services company Schlumberger Ltd. stated it is lowering its presence in the U.S. amid a slowdown in shale drilling. Meanwhile, Chevron Corp. and Exxon Mobil Corp. are among the weakest components in the Dow Jones Industrial Average. Shares of both companies continued to pullback Friday after Chevron reported a loss in the fourth quarter and Exxon revealed profit and revenue fell.

Analysts at Goldman Sachs attributed the pullback in exploration-and-production companies to both weather-related demand and the outbreak in China.

“After a strong December, E&P stocks have sharply fallen in January due in our view to demand concerns driven in part by mild winter weather and, more recently, the spread of coronavirus,” Goldman Sachs analysts said in a note.

This earnings season won’t help. Analysts project energy company earnings to plummet 43% this quarter year-over-year, compared with a decline of 0.3% for the S&P 500 as a whole, according to FactSet data.