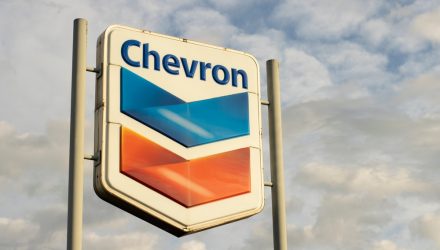 Chevron (NYSE: CVX) posted first quarter profits that jumped to a 10-year high on Friday, but energy sector-related exchange traded funds and investors were not impressed.

The integrated oil producer and the broader energy sector saw profits climb in response to surging oil prices after Russia’s invasion of Ukraine, along with Western sanctions, including a total ban on Russian oil imports from the U.S.

Chevron has answered the White House’s call to ramp up production in the wake of the global supply crunch to help ease the shortfall in Europe, and the U.S. Chevron chief executive Mike Wirth even said that the company was considering additional investments in renewable fuels and liquefied natural gas (LNG).

“Chevron is doing its part to grow domestic supply with U.S. oil and gas production up 10 percent over first quarter last year,” Wirth said in a statement.

The U.S. has increased its LNG exports as the Biden administration helped bolster supply to Europe and Russia threatened to cut supply in the region in response to sanctions on Moscow.

“It is an area of high priority for us because of the market demand for it,” Wirth said.

“I don’t want to leave the impression that we are off to the races to do anything tomorrow,” Wirth added. “We really can take a long-term look.”