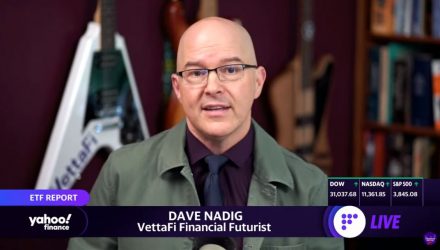 Energy inputs are always going to be cyclical with the economy. This is the primary topic of this week’s “ETF Report” on Yahoo Finance. VettaFi’s financial futurist, Dave Nadig, was on hand to discuss how the energy sector has shifted, considering where things are in the market.

As Nadig states, “When people think the economy is doing well, oil tends to run up. On the contrary, when people think we’re heading for a recession, oil tends to come down. However, digging under the hood, funds like the Energy Select Sector SPDR ETF (XLE) are sitting with four-month lows, making it an obvious bottom call to say now.”

With that in mind, energy companies are pretty disciplined. They are returning cash to investors through dividends and buybacks instead of chasing oil prices. There shouldn’t be a push for vast swaths of investments chasing short term price swings, Nadig notes, as that leads to even worse bus cycles. Focusing on the energy companies that are putting up pretty solid yields is an excellent place to start for investors, as opposed to eschewing energy from one’s portfolio.

“We’re going to be in the midst of a major energy transition for the rest of my lifetime, and the big oil companies are going to be a big part of that,” Nadig adds.

Regarding opportunities in other spaces, Nadig discusses energy infrastructure, as the U.S. has become energy independent on a net basis. That means the country has to move energy around a lot to achieve that independence. Taking crude from Canada, refining it into products, exporting that, importing different grades of crude, etc.

Investors can go after this in a couple of ways. A common method is through the MLP space. The Alerian MLP ETF (AMLP) is a notable fund in that regard. There’s also a broader play with a product like the Alerian Energy Infrastructure ETF (ENFR). Those are interesting ways to play it, but for anyone who may be anti-oil sector, the KraneShares Global Carbon Strategy ETF (KRBN) has been on fire as of late, pulling in over a billion dollars in the last year.

At times, carbon tends to move a bit counter to energy, but it appears to have its own market dynamics. And more importantly, companies like Exon are some of the most prominent players in that area, meaning oil is not entirely out of the picture but actually investing in the firms that are caught up in the transition to a net-zero world, which includes some of those oil companies.

As far as how people should think about investing in energy ETFs, considering that transition, Nadig notes that it cannot just be about selling oil all the time. Really, with the political and social environments attempting to push people away from investing too much in petroleum fuels in favor of alternatives, the energy companies are the ones that will have to wean investors off this product through things like carbon capture.

“Some of this is still a decade off before it’s really putting a dent in things, but I think it’s smart to think about the whole picture. Just focusing on one fuel source is not really how to think about the global economic environment.”

vettafi.com is owned by VettaFi, which also owns the index provider for [AMLP, ENFR]. VettaFi is not the sponsor of [AMLP, ENFR], but VettaFi’s affiliate receives an index licensing fee from the ETF sponsor.