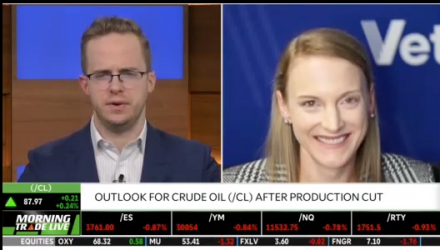 The OPEC production reduction has crude oil prices approaching $90 a barrel, causing some investors to be nervous that the cuts will reignite inflation worries. VettaFi’s director of research Stacey Morris appeared on TD Ameritrade Morning Trade Live with Oliver Renick to dig into the news.

Though Morris said, “if you had asked me a week ago if I thought they would cut by two million barrels, I would have said no,” she indicated that going into the meeting it was clear OPEC was going to make production cuts. Morris thinks that there is some confusion about the size of the cuts. “There is some misunderstanding in general about the overall size of the cut and what it means for oil markets,” she said. Actual cuts are likely closer to one million barrels than two million. Given that about 100 million barrels are produced a day, the difference between 1% and 2% is quite substantial.

According to Morris, “oil markets started pricing this in ahead of the meeting.” Only a few countries would actually need to lower their production.

🎥 Alerian’s Stacey Morris provides some clarification on what the cuts really mean and why energy stocks continue to outperform despite a downtrend in crude oil:

The Spread Between Companies and Oil

Even as crude oil prices have gone down and up, energy companies have managed to perform well. Renick wondered why the energy stocks have been doing well even as the commodity itself has been wobbly.

Morris noted that energy companies have done a great job generating free cash flow and ample dividends, tightening their fundamentals. “This sea change in the energy space has made these companies much more investable,” Morris said, noting that, combined with the lower liquidity and volume in oil markets, this has decoupled prices from energy companies somewhat. Morris sees energy as likely to continue to be a bright spot in a rough market environment. “Demand looks very strong for both gasoline and diesel.”

One big factor Morris says is important to track in China. “The expectation is that Chinese demand is going to fall this year for the first time since 1990.” Morris observed that China could start seeing more demand as COVID lockdowns begin to unwind.