Last week the Federal Reserve announced that in October it will begin a long, slow, and cautious process of shrinking its balance sheet. By shrinking its balance sheet the Fed will begin withdrawing some of the Quantitative Easing (QE) stimulus it has provided to the US economy and global financial markets over the past 9 years.  We believe that over the next 12 to 18 months the Bank of England, Bank of Japan and European Central Bank will follow the Fed and start winding down their QE stimulus programs.

As the Fed and then other central banks begin shrinking their balance sheets, they will effectively “delete” some of the $10 trillion in new money they have injected into financial markets over the past 9 years. Thus the end of the QE era is likely to have significant consequences for financial markets, in our view.  We want to ensure that RiverFront investors understand these potential consequences and the potential impact on portfolio strategy in light of the significant changes in global monetary policy that the Fed initiated with last week’s decisions.

What is QE and How Does it Work?

QE is an aggressive monetary policy that the Federal Reserve and other global central banks have used to stimulate their economies in the wake of the 2008 financial crises.  Under QE, central banks print money by expanding bank reserves. They use the newly created currency to buy financial assets, primarily government guaranteed bonds. Since bank reserves (the printed money) are a liability for these central banks and the purchased bonds are an asset, one effect of QE is to increase the size of central bank balance sheets. The chart below shows that the major developed economy central banks (US, UK, Japan and Europe) have printed more than $10 trillion dollars since 2008, and have purchased an equal amount of government bonds and other financial assets.

Global Central Banks Have Printed over $10 Trillion Since 2008 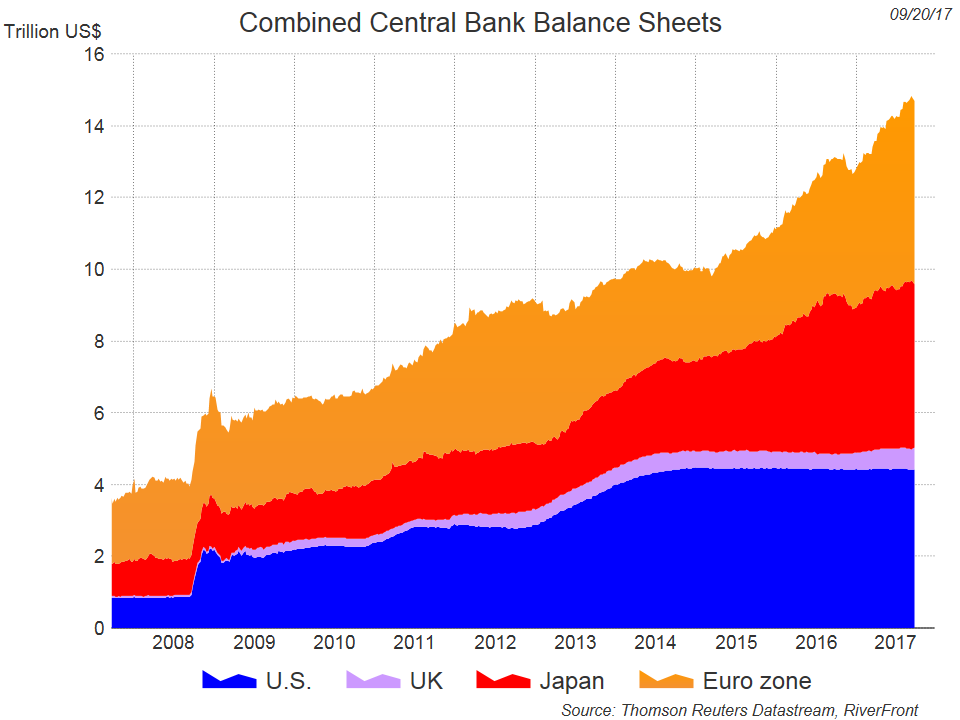 By purchasing such a huge amount of government bonds and other financial assets, QE helps keep interest rates low.  That makes it easier for governments around the world to finance their budget deficits and for homeowners to refinance into lower mortgage payments.  Also, QE injects more money into financial markets (the central banks print it) and takes an equal amount of safe government bonds off the market (the central bank buys them).  All that newly printed money has to go somewhere, and therefore QE helps support prices for corporate bonds, equities, real estate and other financial assets.

How Do Central Banks Wind Down QE Stimulus Policies?

We believe the central banks currently engaged in QE are likely to follow the Fed’s three step process for winding down these stimulus programs.  First, the central bank slowly “tapers” their monthly purchases of government bonds down to zero (if they buy $80 billion this month, they buy $60 billion next month).  Once monthly QE bond purchases have tapered to zero, the central bank keeps its balance sheet roughly unchanged by reinvesting the proceeds of all maturing bonds.  In the final stage of unwinding QE, the central bank stops reinvesting all of its bond maturities and its bond portfolio begins to shrink.  Unreinvested cash from maturing bonds is deleted from the financial system and the total supply of bank reserves (printed money) declines in lock step with the shrinking bond portfolio.

The Fed was the first central bank to aggressively implement QE, the first to taper its purchases to zero (in October of 2014) and is the first central bank to advance to stage 3 and actually begin deleting money from the financial system.  The Fed’s plan calls for reinvesting all but $10 billion in maturing securities at first.  That means that $10 billion in bank reserves will be deleted from the system in October.  This amount will slowly increase until by the end of 2018 the Fed plans to be shrinking its balance sheet and reducing bank reserves by $50 billion per month.

The Bank of England has also tapered its bond purchases to zero and is likely to soon follow the Fed and begin to reverse its QE stimulus by shrinking its balance sheet.  The Bank of Japan is slowing tapering its monthly purchases but it has not set any time table for when it hopes to taper to zero.1  The European Central Bank was the last to adopt QE and has not even begun to taper its monthly bond purchases.  Based on comments from ECB President Mario Draghi, we expect them to begin tapering their monthly QE purchases early in 2018.  Financial markets will not feel the full impact of the end of QE until every major central bank has completed stage 2 and has tapered its bond purchases to zero.  Thus we believe the investment implications discussed below are likely to occur gradually over the next 12 to 18 months.

Investment Implications of the End of QE 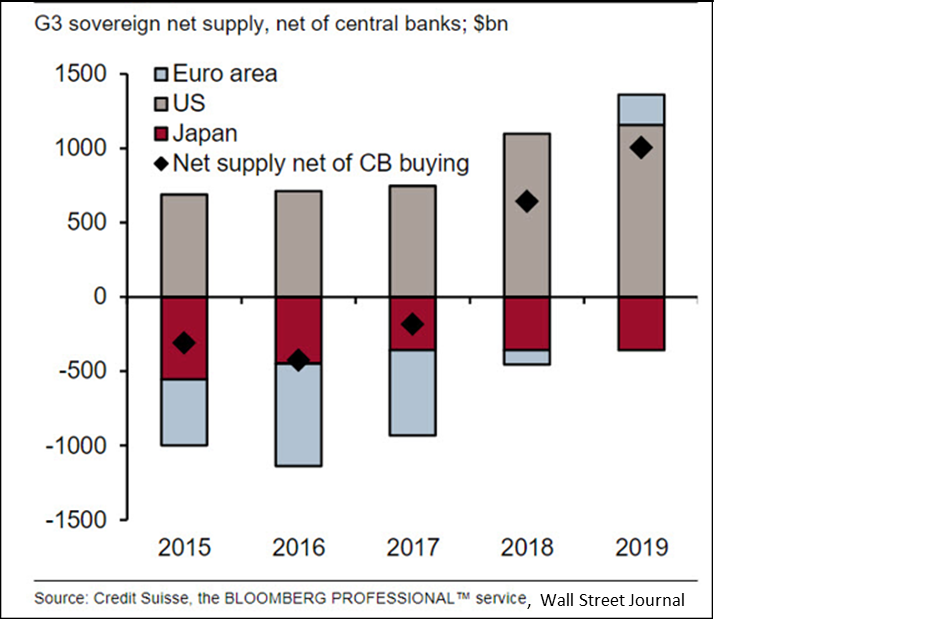 Our relatively positive outlook for equity markets as QE policies are unwound assumes that the cautious, incremental plan approved at the Fed’s September meeting forms a blueprint for every central bank’s QE exit strategy.  However, Fed Chairman Janet Yellen’s term expires in January and she may not be reappointed for a second term.  President Trump could replace her and fill the three open seats on the Federal Reserve Open Market Committee (FOMC) with more ideological candidates.   Similarly, Germany is lobbying hard for a conservative Bundesbank nominee to replace Mario Draghi at the ECB.  The Fed’s current plan has overwhelming support and was adopted unanimously, but until we have more clarity about central bank leadership we can’t be   certain that central banks will be as cautious as we hope as they unwind their QE policies.

An additional source of uncertainty is the somewhat unprecedented nature of the current policy environment.  QE is not new – the Fed helped finance World War 2 and the early years of the Korean War by printing money and buying government bonds.  By 1951 the Fed’s balance sheet was almost as big as a percentage of the economy as it is currently (21% versus 26%, according to a 2015 paper by Niall Ferguson2).  In the 1940s and 1950s, the Fed targeted interest rates and bought as many government bonds as necessary to achieve its interest rate targets.  The Fed backed away from QE by raising its interest rate targets, and as a result the impact on the bond market was known in advance.