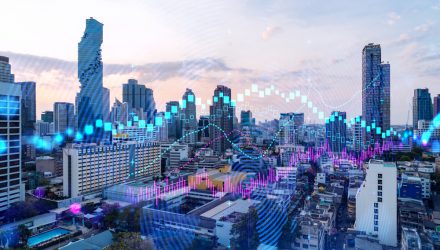 Why Investors Should be Looking at Emerging Markets ETF Opportunities

As we look to the positive trends that will support the developing economies, investors can utilize a focused emerging markets exchange traded fund strategy to capture these overseas opportunities.

In the recent webcast, Burton Malkiel on Emerging Markets: The Next Decade of Global Growth & How to Capture It, Dr. Burton G. Malkiel, EMQQ Global advisor and FMQQ Index Committee Member, Princeton Economist, and author of A Random Walk Down Wall Street, said that he is enthusiastic about the emerging and frontier market outlook, highlighting the Emerging Markets Internet & Ecommerce ETF (NYSEArca: EMQQ) and the Next Frontier Internet & Ecommerce ETF (FMQQ) to access these developing economies.

Specifically, Malkiel argued that future paths will likely favor strategies like EMQQ and FMQQ. He underscored the fact that U.S. valuations are now relatively high. Relative growth will be much higher in EMs as many economies are still in their growth spurt phase. Meanwhile, currencies now favor EM investments. As we consider these positive supporting factors, Malkiel argued that EMQQ and FMQQ portfolios will help investors especially focus on the areas where growth is most certain.

Looking ahead, Malkiel noted that the International Monetary Fund has projected robust growth among the developing world in 2023, with 6.1% growth for India, 5.2% for least developing countries, 5.1% for other Asian economies, and 4.6% for China. In comparison, the United States’ economy is expected to expand 1.0% in the year ahead.

Valuations are elevated in U.S. markets, which suggests that investors could find more attractive opportunities by diversifying away from domestic equities. The S&P 500 Index CAPE ratio was trading around 28x, compared to its historical average of 17x. Malkiel noted that the Nasdaq-100 is trading at a forward price-to-earnings of 21.0x, compared to EMQQ’s forward P/E of 14.7x.

Malkiel also contended that emerging economies could soon enjoy favorable currency trends ahead. After the U.S. dollar strengthened on the back of a hawkish Federal Reserve monetary policy outlook, with the U.S. Dollar Index up 20%, the greenback is due for a mean reversion. Economic models indicate that the USD is overvalued, so a weakening dollar or strengthening emerging currencies could also help support developing market returns.

Kevin T. Carter, founder and CIO of EMQQ Global, also underscored the developing world’s favorable demographics that continue to support consumption-based growth and the fact that 85% of the global population resides in developing countries. Emerging markets and frontier markets are also home to some of the youngest demographics, with about 8.8 times the number of those under the age of 30 compared to developed economies.

Bolstering the ongoing growth outlook for the emerging consumer class, middle-income consumers could take on a more significant role in the global economy ahead, especially in emerging countries where younger demographics thrive, Carter added. According to McKinsey & Co.’s projections, an expected 4.2 billion people will constitute the consuming class by 2025. The emerging markets could account for $30 trillion in consumption, with developed markets making up $34 trillion. In comparison, emerging market consumers only generated $12 trillion in world consumption in 2010.

Looking ahead, Carter argued that investors should consider the growth of consumers or increased consumption trends in developing economies. Specifically, ongoing trends like the growing reliance on smartphones are a significant catalysts in changing global consumption patterns. The rise of e-commerce has also paralleled the increased adoption of smartphone usage and the declining cost of the devices themselves.

Carter added that EMQQ has primarily been a China story as China makes up over 50% of EMQQ’s underlying portfolio, which doesn’t come as a surprise since China’s e-commerce sales are four times larger than all other emerging markets countries combined. However, this does not mean investors should ignore the next frontier of consumer markets. Like many frontiers, developing economies see a slew of new e-commerce or retail internet companies coming online.

Carter also noted that the next frontier population is 4.0 times larger than China, which provides an even bigger consumer base to support a growing internet and e-commerce industry. In addition, the next frontier has only seen e-commerce penetration of 5% or about one-fifth of China’s market.

Financial advisors who are interested in learning more about developing economies can watch the webcast here on demand.</a%>