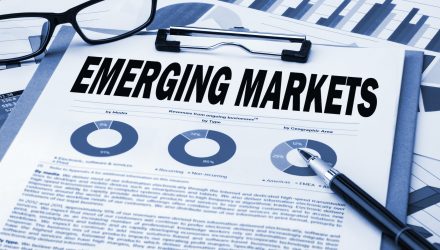 With global political issues resurfacing between the U.S. and China, last week the Senate passed a bill last week that could prevent certain Chinese companies from listing on domestic exchanges if they do not follow regulatory standards. The bill could result in driving U.S.-listed Chinese stocks out of American markets, a potential problem for emerging market ETFs.

“We just want Chinese companies to play by the same rules as everybody else,” said Sen. Chris Van Hollen (D-MD) during an appearance on Yahoo Finance shortly after the bill passed. “This is an important step forward for transparency,” he said.

Since China composes about 40% of most diversified emerging-market ETFs, that may precipitate issues for various funds, said Todd Rosenbluth, senior director of ETF and mutual fund research at CFRA Research.

Rosenbluth explains that rather than eschewing all emerging market ETFs, investors should dig into the stock allocations in their ETFs to determine how much their particular security might be affected by its holdings.

“What is easily lost, I think, on many investors is that Alibaba and JD.com, among others, trade on the New York Stock Exchange or the Nasdaq. So, these are those companies that could be impacted,” Rosenbluth said Wednesday on CNBC’s “ETF Edge.”

“If they’re delisted, obviously they would no longer trade here. They would no longer be in the index,” he said. “So it’s important to make sure investors look inside and know what their exposure to China is in their emerging-markets ETF as well as where they’re getting that exposure, which is important also for smaller ETFs like FRDM, which has no Chinese exposure.”

Other experts were less concerned about the fallout that might arise from delisting Chinese stocks. The bigger issue could be examining a shift in the global investing landscape according to Douglas Yones.

“There are quite a few ETFs that cover the Chinese companies, but it doesn’t always necessarily state where that company has to list,” said Yones, head of exchange-traded products at the New York Stock Exchange in the same segment.

“Let’s say a company was currently listed in the United States. If it were to move to another market, it might just stay at the same weighting, the same percentage within that ETF and the ETF is now just buying and selling the Chinese company on another market,” he added. “So, the net impact to ETFs, I think, could potentially be muted, but the net impact to the overall global capital markets, I think that’s real and something that we want to make sure we’re weighing and balancing before we make any major changes.”

EEM is currently 0.39% higher on Thursday with roughly an hour left in the trading session, while VWO and IEMG are up against similar amounts.