You are at:Home»Currency-Hedged»Election Could Test Japan ETFs 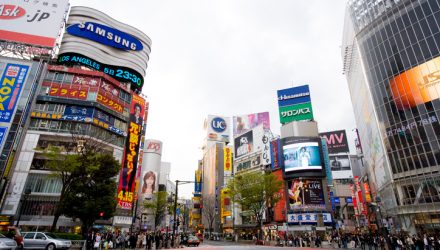 ETFs tracking Japanese stocks have been solid performers this year as investors are racing to ex-US developed market equity funds.

For example, the iShares MSCI Japan ETF (NYSEArca: EWJ), the largest Japan ETF, is up 18% year-to-date.

EWJ has delivered a solid performance even in the face of the U.S. dollar slumping and the yen being solid. Japanese stocks are usually adversely affected by a stronger yen due to the economy’s high dependence on exports. Importantly, Japanese stocks are attractively valued relative to other developed markets.

EWJ and rival Japan ETFs could be tested by the Oct. 22nd snap election, which many market observers believe will be won by Prime Minister Shinzo Abe. EWJ has recently seen an uptick in options activity ahead of that election.

“Specifically, on Friday, traders apparently bought to open weekly 10/27 57.50-strike calls, which saw the biggest open interest change over the weekend, with more than 12,600 contracts added. By purchasing the calls to open, the buyers expect EWJ shares to continue their trek north of $57.50 through Oct. 27, which encompasses the aforementioned Oct. 22 election,” according to Schaeffer’s Investment Research.