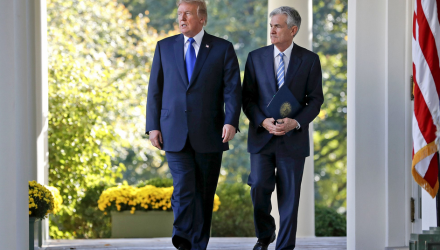 Economists: Trump’s Criticism of Fed Reflects His Own Miscues

U.S. President Donald Trump’s ire with the Federal Reserve has been well-documented, particularly when the capital markets experience a downturn or interest rates are raised, but some economists are quick to defend the Fed, saying that Trump denigrating the Fed is a reflection of his own market miscues.

In particular, Trump’s tariff-for-tariff poker game with China has roiled the markets whenever talk of tariffs or the implementation of tariffs reach the financial community.

“There’s definitely a lot of angst in the market around trade and tariffs—companies needing to alter their sourcing alter their supply lines, alter who and how they sell products across countries—the uncertainty of that is definitely weighing on the markets,” said Brian Rehling, co-head of global fixed income strategy at the Wells Fargo Investment Institute. “That probably continues to be one of the bigger factors driving markets lower the last couple of months.”

Trump has the chance to right his wrongs in the market as a result of the trade wars as investors are in a state of wait-and-see with the G-20 Summit meeting in Buenos Aires underway–the markets will be fixated on a meeting between Trump and China president Xi Jinping. This weekend will be of particular importance as Trump and Xi are slated to have dinner and discuss their trade differences with the hope for the capital markets, of course, is that the two economic superpowers can work out a tangible trade deal–the trigger event that could send the markets higher globally.

Had the markets responded negatively, Trump would have definitely sounded off on the Fed just like he did during a recent interview with the Washington Post.