You are at:Home»Equity ETFs»Dow Falls Over 200 Points as Tech Sector Woes Continue 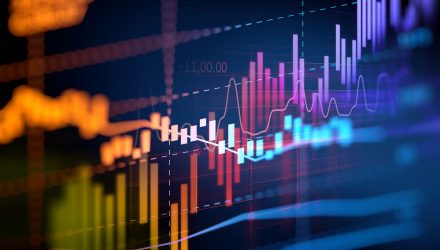 The Dow Jones Industrial Average fell over 200 points Monday as technology names like Apple and Nvidia weighed heavily on the sector in Monday’s early trading session.

Nvidia’s earnings per share came in at $1.84 per share, besting analysts expecting $1.71 per share. The culprit was revenue, which clocked in at $3.18 billion versus an expected $3.24 billion by Wall Street.

Further blame could be assigned to the chipmaker’s fourth quarter guidance as it’s expecting $2.70 billion in revenue for the final quarter while Refinitiv consensus estimates came in at a more exuberant $3.40 billion. The lower guidance came on expectations of surplus inventory for the quarter.

Apple shares fell 3% after a report by the Wall Street Journal revealed that the tech giant will be cutting production orders for the latest iPhones. The stock has been depressed by a spate of analyst downgrades, including Guggenheim Partners, which lowered its rating on the tech giant from “buy” to “neutral,” citing that a 5% decline in iPhone units will occur in 2019.