You are at:Home»Equity ETFs»Don’t Sleep On Chile as an Emerging Market Play 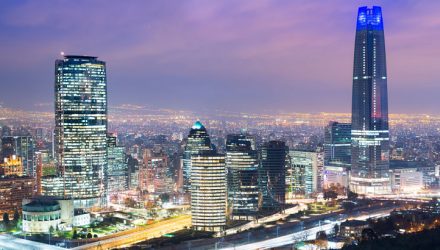 Don’t Sleep On Chile as an Emerging Market Play

When it comes to Latin America investing destinations, Chile often goes overlooked relative to Brazil and Mexico, the region’s two largest economies, but that should not take away from opportunity with the iShares MSCI Chile Capped ETF (NYSEArca:ECH).

Up nearly 22% year-to-date, ECH is one of this year’s best-performing emerging markets single-country ETFs. This year, ECH is easily outperforming its Brazil, Colombia and Peru counterparts as Chilean stocks work their way toward record highs.

One country whose stock market we highlighted for its (possibly huge) potential  was Chile. Like many resource-laden emerging markets, Chile’s IPSA Index had suffered severely over the prior 6 years. However, the signs of a potential turnaround were evident,” according to ETF Daily News. “First off, the IPSA had already twice tested potentially key long-term support in the 61.8% Fibonacci Retracement of its 2009-2011 rally, near 3400. Secondly, its post-January bounce had brought it up to test its post-2010 Down trendline near the 4050 level. After several touches over the prior few years, we surmised that the index stood a reasonable chance of finally breaking up through the trendline.”

Chile is getting a lift from resurgent copper prices as the country is the world’s largest producer of that industrial metal. The iPath Bloomberg Copper Subindex Total Return ETN (NYSEArca:JJC) is one of this year’s best-performing commodities exchange traded products.