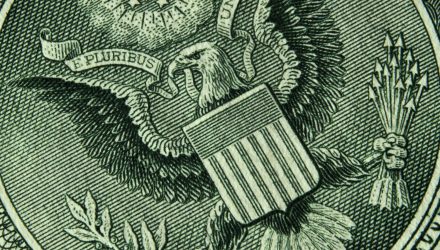 Dollar Departures Could be Seen in 2019

The U.S. dollar has been one of 2018’s best-performing major currencies, a point confirmed by the Invesco DB U.S. Dollar Index Bullish Fund (NYSEArca: UUP). UUP, which tracks the dollar’s movements against a basket of major developed currencies, is up about 8% year-to-date.

Some analysts and market observers believe the dollar is poised to retreat in 2019. Analysts argued that the dollar’s strength at the start of the year was just a brief spike in a broader downward trend that began in 2017, pointing to easing of trade tensions, the ebbing effects of U.S. tax cuts and the Fed’s hesitation to tighten its monetary policy.

“A major driver of the dollar’s decline could be a downturn in the U.S. economy, especially in the second half of the year, JPMorgan Asset Management predicted,” reports Bloomberg. “Others expect the Federal Reserve to slow down interest-rate increases, which they see as bearish for the greenback. Rising market volatility and capital demand abroad will also spur an outflow of funds from the U.S., according to Morgan Stanley strategists.”

The Other Side Of The Trade

Traders who are considering a bearish position on the dollar can capitalize on the further weakness through an inverse USD strategy, the Invesco DB US Dollar Index Bearish (NYSEArca: UDN). UDN is down almost 6.30% this year.

Data suggest that with 2019 right around the corner, being bearish on the dollar is an increasingly popular idea among professional investors.