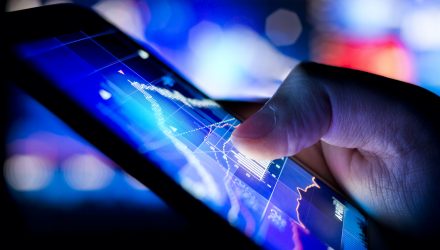 Do Tech Stock Trends And ETFs Moving Higher Mean The Worst Is Over?

Ian Young April 15, 2020
With Apple making a big move today as China‘s iPhone shipments in March were 2.5 million versus only a half a million in February, and Technology Select Sector SPDR Fund (XLK) up over 4% Tuesday, the question has arisen as to whether not big technology is projecting there will be a recovery in stocks.
“If you think about a couple of weeks ago when we started to get China data out of Nike, Starbucks, it was also a catalyst for markets. So this iPhone shipments data in China of which 2 1/2 million is Apple’s of the 2.9 million on the international scale is very bullish, the question is, is this pent-up demand or is this a sustained dynamic you’re going to see into April?” Tim Seymour, founder and Chief Investment Officer of Seymour Asset Management (SAM) commented on CNBC.
Exports from China were also down less than expected which is a potential predictor of how the economy might recover in the US as well according to some analysts.
“This is what the markets are trying to do with Asia as a region– to interpolate what’s going to happen over here,” Seymour explained.
In addition to economic data, the recent bullish moves in stocks have experts confounded, and wondering whether or not it is predictive of higher stock prices to come.
“I thought this thing would stall at around 2790 on the S&P and we were obviously blown right through it. There’s a lot of optimism out there. I mean another week of this and the NASDAQ is at an all-time high. I’m not quite certain what everybody’s looking at… But maybe people are definitely extrapolating,” said Guy Adami on the same segment.
Despite the move higher in stocks over the last few weeks, however, analysts are still skeptical as to whether or not this move has some true legs, given the ferocious pace with which equities have rallied back, as a more moderate rise might typically be more sustainable.
Moreover, with the number of coronavirus cases still climbing today, the number of fatalities at a record high, and unemployment at a record high, one still has to question whether or not this bear market is really over so easily.
“I’m hard-pressed to believe it’s gonna be this simple in the environment that we find ourselves in. I take some encouragement in the fact that that the Vix is significantly above 40. The bond market has absolutely quieted down which is encouraging, and you have this moving the Russell to the upside which is sort of a stealth thing as well. I just don’t understand how this can continue at the arc in the trajectory that we’ve had over the last couple of weeks,” Adami said.
For more market trends, visit  ETF Trends.