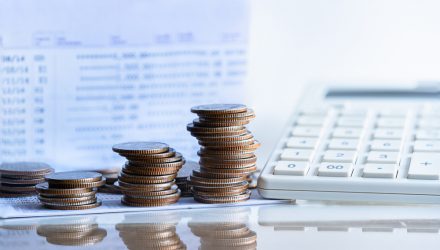 Income-minded investors should look to dividend aristocrats and related exchange traded fund strategies that consistently grow dividends, instead of targeting companies with just the highest yield.

According to Credit Suisse, almost 60% of total returns since 1900 are attributed to reinvested dividends over the past 120 years in the U.S., Proactive Investors reports.

“However, we believe that just focusing on dividend yield has been an unconvincing style,” Credit Suisse analyst Andrew Garthwaite said.

Data showed that over the past decade, the highest quintile of dividend yields were the worst performers. The analyst argued that these high-yield companies tended to be the “disrupted value” stocks that eventually need to cut dividends.

“It is thus critical to look at dividend growth as well as yield,” Garthwaite added.

The group of so-called dividend aristocrats, or stocks that have been able to consistently grow dividends, has actually outperformed by 40% and 15% over the past 12 years in Europe and the U.S., respectively.

In the U.S., dividend aristocrats “tend to move very closely with real yields” and are currently discounting a 1.5% Treasury Inflation-Protected Securities yield, according to Garthwaite.

Furthermore, the analysts believed that valuations are “abnormally cheap” on both price earnings and price-to-book valuation metrics while the strategy “performs much better when ISM falls (and ISM is likely to peak over the summer).”

Investors can also target U.S. dividend growers through a number of ETF options. For instance, the iShares Core Dividend Growth ETF (NYSEArca: DGRO) specifically targets companies that pay a qualified dividend. These firms must have at least five years of uninterrupted annual dividend growth and an earnings payout ratio less than 75%.

The ProShares S&P 500 Aristocrats ETF (NYSEArca: NOBL) only targets S&P 500 companies that have increased their dividends for at least 25 consecutive years.

The Vanguard Dividend Appreciation ETF (NYSEArca: VIG), the largest dividend-related ETF on the market, tracks U.S. stocks that have increased dividends on a regular basis for at least 10 consecutive years.

The Schwab US Dividend Equity ETF (NYSEArca: SCHD) includes 100 stocks based on strong fundamentals, such as cash flow to debt, return on equity, dividend yield, and consistent dividend payouts for at least 10 consecutive years.

The SPDR S&P Dividend ETF (NYSEArca: SDY) holds firms that have a minimum dividend increase streak of 20 years for inclusion. Moreover, SDY follows a yield-weighting methodology that allocates a larger weight toward those with higher yields, so the portfolio leans toward mid-sized companies.

The WisdomTree U.S. Quality Dividend Growth Fund (NasdaqGM: DGRW) includes companies with high long-term earnings-growth forecasts for the next three to five years and weights components based on the value of dividends they are expected to pay over the next year.