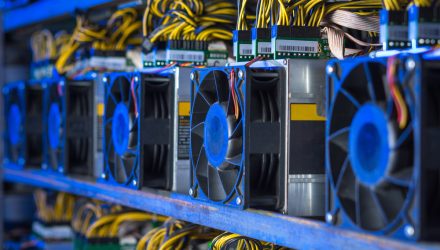 As is the case with cryptocurrency, non-fungible tokens (NFTs) are a young, emerging asset class. The latter is actually far younger, but just like crypto, NFTs are capturing plenty of attention among investors.

Owing to that youth, many exchange traded funds lack NFT exposure, and that’s likely to be the case for some time. However, the intersection of NFTs and ETFs isn’t completely barren, thanks to the ARK Fintech Innovation ETF (NYSEARCA: ARKF).

Some of ARKF’s NFT credibility stems from its status as one of the largest ETF owners of Coinbase (NASDAQ:COIN) stock. The crypto exchange behemoth, which is ARKF’s second-largest holding at a weight of 7.37%, is making its presence felt in the NFT space.

Last week, “Coinbase announced plans for a peer-to-peer Non-Fungible Token (NFT) marketplace which will broaden its crypto-focused product suite. Competing with leader OpenSea, Coinbase’s marketplace will allow users to mint, sell, and trade NFTs through its user interface,” according to ARK Invest research. “To facilitate trades, Coinbase will activate smart contracts on Ethereum and, in the future, will support other blockchains. With more than 1.5 million users on the waitlist after the first few days, well above OpenSea’s user base of 400,000, Coinbase’s offering seems destined for early success.”

As ARK notes, NFTs could act as a revenue diversifier for Coinbase.

“We believe that given its broad reach and ease of use, Coinbase should be able to diversify its revenue stream from brokerage and custody services with NFTs. With a recently announced feature, Direct Deposit, for example, it will reduce the friction associated with converting fiat currencies into cryptoassets, enabling decentralized finance (DeFi) and NFT applications,” said the issuer.

ARKF’s NFT exposure doesn’t end with Coinbase. Online sportsbook operator DraftKings (NASDAQ:DKNG), which accounts for almost 2% of the fund’s weight, is also a player in the ETF space.

There’s also a crypto tie-in. On Monday, DraftKings said it’s working with Polygon to further support DraftKings Marketplace. Polygon is a digital token based on the ethereum blockchain.

“DraftKings now has the option to potentially contribute to Polygon’s governance, and help secure the network as a validator node with its own stake pool,” according to a statement.