You are at:Home»Disruptive Technology Channel»Venture Funding in Israel Points to Long-Term Tech Potential 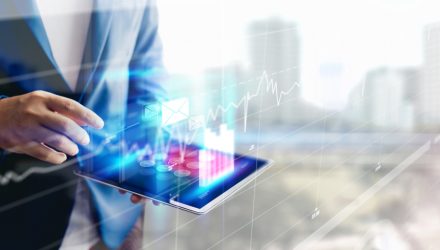 Outside of the U.S. and Asia, Israel is one of the most tech-centric investable markets in the world — a theme investors can access with select exchange traded funds, including the ARK Israel Innovative Technology ETF (Cboe: IZRL).

IZRL, one of two passively managed ETFs offered by ARK Investment Management, isn’t a dedicated technology ETF, but nearly half of its holdings hail from that sector, confirming that the fund is a valid play on the rise of the Israeli tech sector and that rise is occurring today.

“In the first three quarters (Q1-Q3) of 2021, the amount of capital raised by Israeli high-tech companies increased by 71 percent over 2020’s annual total of $10.3 billion, according to data released Wednesday by the IVC-Meitar Israel Tech Review, published by the IVC Research Center and the law firm Meitar. The historic amount was due in part to a significant number of funding rounds of over $100 million — 53 such deals — which accounted for a 51% share of the total sum for Q1–Q3, according to the report,” reports The Times of Israel.

Of that $17.78 billion, $5.89 billion was funded in the third quarter, indicating investors’ interest in Israeli tech is accelerating in the back half of 2021.

To be sure, most of that funding is being directed to early stage startup companies, which aren’t yet public, meaning that they aren’t part of the IZRL roster. However, some of these firms will eventually be publicly traded, and that will open doors to potential admittance into IZRL. Data are favorable on this front.

“In addition, the value of high-tech exits soared so far this year, reaching $18.92 billion — up 92% from 2020’s annual results. According to the findings, this is mostly due to a surge in IPOs, 65 in total,” according to The Times of Israel.

Another point illustrates the allure of IZRL as perhaps the premier ETF for accessing Israel. ARK Investment Management has a well-established reputation for focusing on disruptive concepts and ideas. With that in mind, it’s notable that disruptive industries, such as cybersecurity, fintech, and the internet of things, are drawing healthy portions of venture funding directed to Israeli firms.

On Wednesday, IZRL gained nearly 2% on volume that was nearly 50% above the daily average.