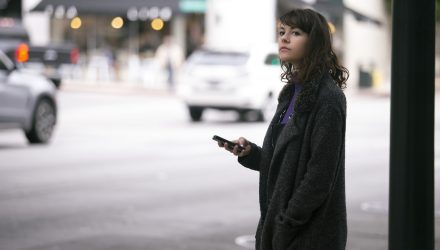 Uber Technologies Inc. made a strong showing with its latest earnings report, and now at least one analyst believes the company is worthy of entering the arena of Facebook, Amazon, Netflix, and Google.

RBC Capital Markets analyst Mark Mahaney was emphatic in his belief that FANGU was perhaps a better acronym for the group of massive internet enterprises that wield the traditional FANG moniker. Adding Uber to the group, as the ride-hailing giant attempts brandish its massive scale while working toward profitability. The stock is up nearly 9.5% in Friday trading.

“Uber is the global ridesharing leader and is becoming the global food delivery leader,” wrote Mahaney, who stated that Uber remains his premier choice in the large-cap internet universe. While Mahaney trimmed his price target on the stock to $59 from $64 while maintaining an outperform rating, he still anticipates over 50% upside for the shares with the newly reduced target.

Bernstein’s Mark Shmulik was also encouraged that by the ridesharing company’s more clear disclosures. “The transparency from management was welcome, ambitious, and hammered home a message of profitable growth,” he wrote. “Now, all Uber needs to do is go an execute against these goalposts.”

Finally,  MKM Partners analyst Rohit Kulkarni also had positive remarks for Uber, stating, “Over the past couple of quarters, Uber’s incremental margins on Rides revenue upside have been >70%, largely responsible for this acceleration in pathway to profitability”.

“We think this trendline is sustainable near-term, with potential for further upside if food delivery companies start acting like good stalwarts of capital,” he added.

With companies like Lyft (NASDAQ: LYFT) and Uber (NYSE: UBER) in its holdings, the Renaissance IPO ETF (NYSEArca: IPO) has been anything but disappointing as the ETF was higher by almost 34% last year, and is up over 8% in 2020 already.

IPO tracks the rules-based Renaissance IPO Index, which adds sizeable new companies on a fast entry basis and the rest upon scheduled quarterly reviews. Companies that have been public for two years are removed at the next quarterly review.