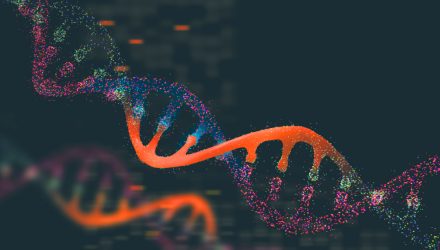 This Genomics ETF’s Holdings Can Ward Off Chinese Competition

Rarely a group lacking for compelling story lines, genomics stocks and exchange traded funds are receiving more attention due to the novel coronavirus epidemic, one that has put the spotlight on the next generation of healthcare.

Underscoring the potency of genomics investments, the ARK Genomic Revolution Multi-Sector Fund (CBOE: ARKG) was able to put together a positive February performance while the S&P 500 incurred a double-digit loss.

ARKG includes companies that merge healthcare with technology and capitalize on the revolution in genomic sequencing. These companies try to better understand how biological information is collected, processed and applied by reducing guesswork and enhancing precision; restructuring health care, agriculture, pharmaceuticals and enhancing our quality of life.

Due to the COVID-19 outbreak, some Chinese companies are looking to make inroads into territory dominated by some ARKG holdings, including Illumina, Inc. (NASDAQ: ILMN), those challengers have a long way to go and may not prove successful.

“A subsidiary of China’s Beijing Genomics Institute (BGI), MGI recently unveiled an ‘extreme throughput’ sequencing platform ostensibly enabling a $100 human genome,” said ARK analyst Simon Barnett in a recent note. “In our view, Illumina opened itself up to this competitive incursion because its HiSeq X system, after enabling the $1,000 genome in 2014, has not dropped prices significantly in more than five years. ARK believes that Illumina has not cut prices because it has enjoyed an effective monopoly, until now perhaps.”

Declining costs are pivotal part of the long-ranging genomics thesis, but Illumina – ARKG’s third-largest holding – enjoys enviable market positioning and may not need to rapidly lower prices simply because a rival is looking to encroach upon its territory.

“While impressive technologically, MGI’s newest instrument, the DNBSeq Tx, seems too complicated and is unlikely to commercialize widely,” said Barnett. “Unlike Illumina’s self-contained sequencers, the Tx platform involves a large robotic workspace, as shown below. Like other sequencers, it achieves its lowest cost per genome only when running at full capacity. To hit the $100 genome, the Tx requires $70,000 – or 700 samples – to run the platform once, limiting adoption to high throughput customers such as large population sequencing sites.”

Breakthroughs in genomic science can present new treatments to help patients recover from what were once believed to be incurable afflictions. Scientists have identified more than 50,000 genetic diseases caused by single-gene mutations, many of which are likely to be treated through genomic approaches, including several methods that have already begun to receive FDA approval.

“According to MGI, even at 25% capacity utilization, the T7 can sequence genomes for $500,” notes Barnett. “Goaded by prospective competition, ARK believes that Illumina will upgrade the NovaSeq with super-resolution optics and its new two-color chemistry, aiming for a $100 genome and ultimately benefiting from the massive latent demand unlocked by lower sequencing costs.”