I believe the coronavirus is the most disruptive event since WWII. This pandemic will change entire industries forever. It’ll ignite certain ones. And be the final nail in the coffin for others.

Recently, I shared three industries that the coronavirus will wipe out for good. It was one of the most popular essays I’ve written. And the feedback continues to pour in. So today, we’re doing something similar.

I’ll show you how this crisis is speeding up three super-important industries. These three industries were accelerating before this pandemic took over—but now, they all just officially moved into hyperdrive. And now’s the time to take advantage.

Oil’s collapse was front-page news recently. And my research suggests it will be the death knell for “old energy” companies. Meanwhile, the coronavirus will accelerate the clean energy revolution already in motion.

America now gets 3X more power from clean energy sources than it did in 2008. And last year, 75% of newly installed capacity came from clean sources, like solar and wind.

Virginia recently passed a bill that requires energy utilities to generate 100% of the state’s electricity from “clean” sources by 2045. Big oil companies know they’re an endangered species. Since 2014, the 10 largest oil firms have ploughed $20 billion into clean energy sources.

Old energy is drying up bit by bit. While clean energy grows by double digits each year. And solar technology has quietly improved by leaps and bounds.

In fact, since 2009, the cost to produce electricity using solar has plunged 90%. And get this, the rapid cost declines mean solar is now cheaper than oil!

This gets to the heart of why the coronavirus will speed up the move to clean energy. When you think of solar power, you likely envision panels on house rooftops. But the vast majority of clean energy comes from wind and solar farms dotted across America.

Electricity providers, like California’s Pacific Gas & Electric and New York’s ConEdison, buy this power and then sell it to us. These power companies will be looking to slash costs during the coronavirus downturn. And the easiest way to do that is to buy cheaper electricity—like solar and wind.

It’s a no-brainer to bet on solar stocks. Old energy stocks have been total disasters, while solar stocks are still up about 25% over the past year: 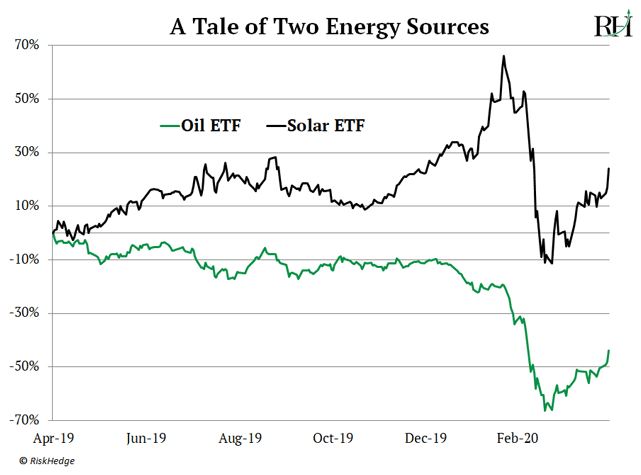 The coronavirus has forced tens of millions of Americans to work from home. Millions more school kids are using “video app” services like Zoom to attend virtual classes. Families separated by the pandemic are doing daily “video calls.”

This is pushing America’s internet to the brink. Think of our wireless networks as a highway. With the recent huge spikes in “traffic” flowing through the digital highway, cracks are appearing.

According to internet research site Broadband Now, average internet speeds in the US dropped over 25% in the past month. This forced the FCC, America’s internet “overlord,” to open up extra “lanes” on Wi-Fi networks. Something it hasn’t done since the ‘90s!

And the EU recently asked Netflix, Facebook, and YouTube to lower video quality in order to free up space on its digital highway. In short, our existing 4G networks are maxed out. They can’t handle the huge increase in traffic. And this is turning the big upgrade to 5G into an urgent necessity.

Remember, 5G can handle thousands of times more traffic than today’s networks. It will widen the wireless “highway” by around 100X.

I’m on record as saying 2020 is the year for America’s 5G rollout. And so far, it’s shaping up that way. Apple (AAPL) recently announced its first 5G iPhone will launch in September. And you better believe Apple will push wireless firms to build 5G as fast as possible before the launch.

T-Mobile and Sprint fast-tracked their 5G rollouts to cities like New York and Philadelphia. And Verizon announced it’s pumping another $500 million into 5G networks this year, bringing the total to $18.5 billion.

The clean energy revolution and 5G are both big megatrends we can make money from. But they pale in comparison to the importance of this last disruption. The coronavirus is sending the disruption of money into hyperdrive.

If you’ve paid a medical or tuition bill recently, you know a dollar doesn’t go as far these days. In fact, by the US government’s own calculations, a dollar is worth 86% less than it was 50 years ago! Take a look: 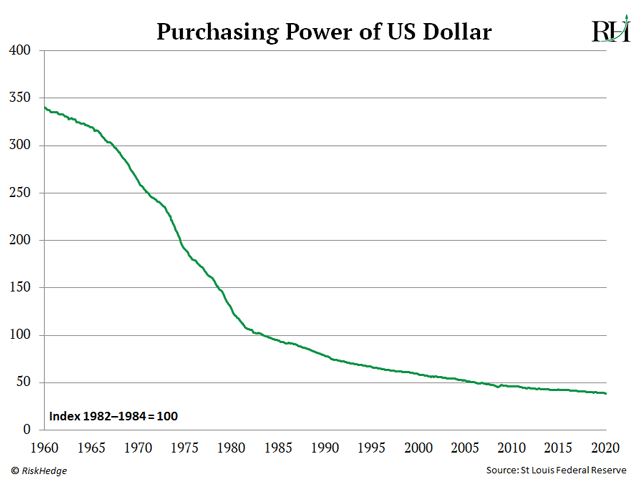 If this were a chart of a stock, would you buy it? Absolutely not. This disruption mostly comes from the US government messing around with the dollar.

If you’re familiar with how our financial system works, you know our money isn’t tied to anything of real value anymore. Rather, the value of the dollar largely depends on politicians making responsible financial decisions.

And governments are spending record amounts of money right now. In fact, $7 trillion worth of stimulus packages have been passed in just the past few weeks. This dwarfs what we saw in the financial crisis and even the Great Depression.

When governments start messing with the value of money, hard assets like gold tend to soar. Following the 2008 meltdown, the US government launched a $1 trillion+ stimulus package in 2009. This kicked off a monster run in gold. In fact, gold investors doubled their money in two years: 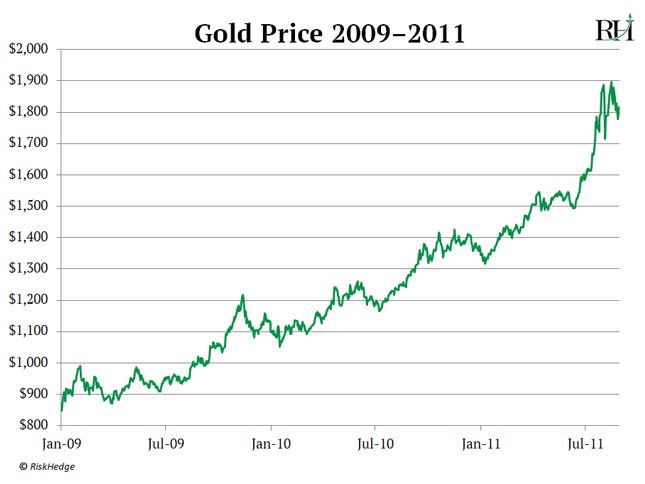 And folks who bought some gold stocks did even better. Remember, gold stocks are gold on steroids. As a group, they soared 270% over the next three years: 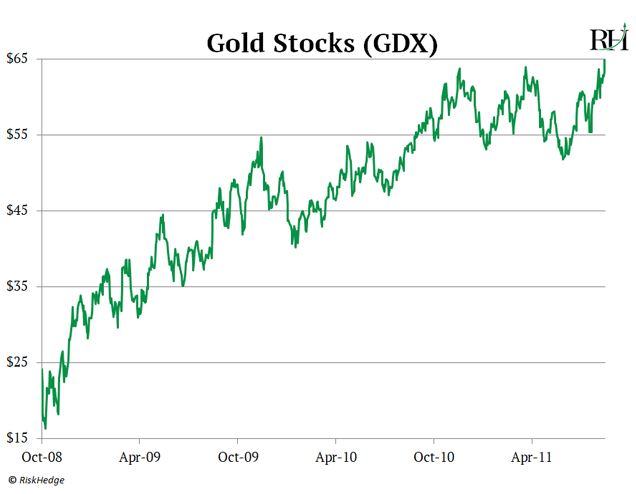 Since the US Congress started debating the historic $2.2 trillion stimulus package in early March, gold stocks have surged more than 80%. Longtime RiskHedge readers know me as the disruption guy. My team and I invest in fast-growing companies changing the world.

But it’s clear the disruption of money has become one of the most important trends to get behind right now. Not only is it affecting the dollars in your bank account, it could also be handing you an unprecedented opportunity in gold stocks.