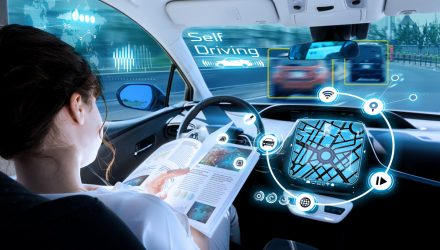 Self-driving and autonomous vehicle technologies aren’t necessarily elusive today, but there’s still progress to be made on these fronts.

As that progress is made, it wouldn’t be surprising to see Elon Musk’s Tesla (NASDAQ:TSLA) participate, or even lead the way. That could be good news for a variety of exchange traded funds, including the ARK Autonomous Technology & Robotics ETF (CBOE: ARKQ).

As its name implies, ARKQ focuses on autonomous technologies — which few ETFs do — making it one of the most relevant ETFs when it comes to self-driving evolution.

“Tesla certainly seemed to be among the leaders in developing autonomous driving technology when it launched its first advanced driver-assist system, Autopilot, back during the initial wave of self-driving hype in 2014,” reports John Rosevar for CNBC. “More recently, Tesla’s Full Self Driving system has drawn plenty of attention from analysts and investors — not least because of comments from Elon Musk suggesting that in the not-too-distant future, one’s Tesla might be able to make money by serving as a robotaxi when it’s not in use by its owner.”

“Tesla’s current beta version of FSD has some promise, but it’s a long way from being ready for deployment without a human at the wheel — much less operate as a 24/7 robotaxi in complex urban environment,” according to CNBC.

Currently, standard autopilot technology is available on all new Teslas, and enhanced autopilot and full self-driving capability are add-ons, meaning that those are revenue streams with significant long-term potential for the company.

Self-driving technologies are intended to enhance the overall driver experience, but there are promising safety implications as well — a point that Tesla has frequently highlighted.

“Autopilot is an advanced driver assistance system that enhances safety and convenience behind the wheel. When used properly, Autopilot reduces your overall workload as a driver. Each new Tesla vehicle is equipped with eight external cameras and powerful vision processing to provide an additional layer of safety,” according to the company.

Bottom line: If Tesla can substantiate that its FSD decreases driver error and the number of accidents on the road, that alone could be a major long-term investment catalyst. Autonomous taxis could be icing on the cake.