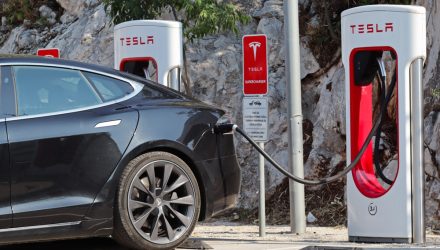 Commenting on competition in the EV space, media pundits tend to frame new EV capital spending (capex) announcements as threats to Tesla. Some point to the $35 billion and $50 billion that GM and Ford, respectively, have committed to EV production, concluding that the impact on Tesla will be negative, Sam Korus, associate portfolio manager at ARK Invest, wrote in a Monday insight

“ARK believes this logic is flawed for two reasons. First, new EVs are taking share from internal combustion engine (ICE) vehicle suppliers. Second, according to consensus forecasts, Tesla’s EV capital spending will surpass that of both Ford and GM by 2025,” Korus wrote.

According to the consensus forecast, Tesla’s capex will exceed the budgets of Ford and GM in 2023 and 2025, respectively, according to ARK.

“If they do not match Tesla’s capex in 2025 and beyond, we believe Ford and GM are unlikely to keep pace with its growth,” Korus wrote. “During its recent earnings call, Elon Musk added to the competitive dynamic, announcing that Tesla intends to expand its network of giga-factories from six to 12 sites during the next few years.”

Companies within ARKW are focused on and expected to benefit from shifting the bases of technology infrastructure to the cloud, enabling mobile, new and local services, such as companies that rely on or benefit from the increased use of shared technology, infrastructure and services, internet-based products and services, new payment methods, big data, the internet of things, and social distribution and media. These companies may develop, produce or enable cloud computing and cyber security, e-commerce, big data, artificial intelligence, mobile technology and internet of things, social platforms, blockchain, and P2P.