You are at:Home»Disruptive Technology Channel»Tesla Lures Investors to This Soaring ETF 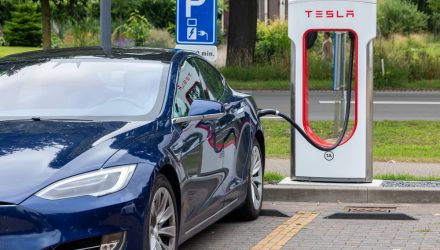 The ARK Innovation ETF (NYSEArca: ARKK) is coming off a second-quarter gain of 62% and its status as one of the largest holders of Tesla stock is a big reason why the fund is soaring. ARKK’s Tesla allocation, which is approaching 11%, is also a reason behind investors flocking to the fund.

“Traders put almost $180 million into the Ark Innovation ETF (ARKK) in the five-day period ended Friday, the most since it began trading in 2014, according to data compiled by Bloomberg. That was the actively managed fund’s 17th straight week of inflows. The electric-car maker has more than doubled to around $990 this year,” according to Bloomberg.

When it comes to asset-gathering proficiency, few actively managed ETFs can match ARKK’s 2020. Investors have added about $1.7 billion to the ARK fund this year, taking its assets under management tally to roughly $4.6 billion, making it the largest equity-based actively managed fund in the process.

Translation: ARKK offers investors much more than Tesla. It’s fintech and genomics exposure, just to name a pair, are bolstering the fund this year, sending it a 2020 gain of more than 42%.

“It’s also actively managed, which appeals to those looking for help navigating the markets during the pandemic. So far this year, 46% of active equity ETFs are beating their passive peers, double the three-year rate, according to a June 25 report from Bloomberg Intelligence,” according to Bloomberg.

However, if it is more Tesla exposure that investors are after, ARK covers that base, too. The ARK Autonomous Technology & Robotics ETF (CBOE: ARKQ) devotes almost 13% of its weight to the electric vehicle maker, a weight that’s meaningful because ARKQ, which is also actively managed, is up more than 27% this year.