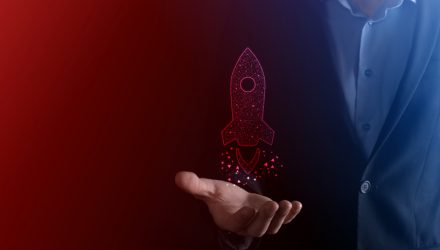 The ARK Space Exploration and Innovation ETF (ARKX) is making waves as the latest addition to the space exchange traded funds fray and as one of the most successful ETFs to come to market this year.

As of the end of the second quarter, the actively managed ARKX has $627 million in assets under management — an impressive tally for a new ETF of any stripe, particularly one that’s thematic in nature. That’s a nice superlative, but what’s really important is the viability of ARKX’s underlying investment thesis.

Fortunately, there’s positive momentum on that front, and some of it is being accrued by companies that don’t currently reside in the ARK Invest ETF. Take the case of Rocket Lab USA (RKLB).

That company “is getting a lift after announcing it was providing launch services for an orbital space-junk-removal project for privately held Astroscale,” reports Al Root for Barron’s. “Wednesday’s announcement continues a hot streak for the company. Rocket Lab has recently announced launch and satellite business wins with National Aeronautics and Space Administration, internet-of-things infrastructure provider Kineis, earth-observation company Alba, among others.”

As noted above, Rocket Lab isn’t a member of the ARKX roster, and SpaceX is still a privately held company. However, ARKX isn’t confined by an index, so ARK could potentially add Rocket Lab to the ARKX lineup at some point, and it could be swift to include SpaceX should that space tourism and exploration firm go public in the future. For ARKX investors, a futuristic view is required, but there’s potentially significant opportunity with SpaceX and Rocket Lab.

“Rocket Lab, of course, is a mini-SpaceX. It can provide launch services as well as build satellites. Rocket Lab’s market capitalization is about $7.1 billion, based on recent prices and its roughly 483 million fully diluted shares outstanding. SpaceX–which just finished taking non-professional astronauts into orbit—is valued at about $74 billion in private markets,” according to Barron’s.

Both companies make for sensible additions to ARKX because the ARK fund includes both orbital and sub-orbital space firms in its lineup. Aerospace and defense firms and enabling technology providers are also found on the ARKX roster.

Bottom line: The ARKX thesis is earning more validation, even if it’s by way of companies not yet on the fund’s roster, and the ETF has the flexibility to eventually capitalize on those opportunities.