You are at:Home»Disruptive Technology Channel»ARKX Angling Its Way to Space ETF Leadership 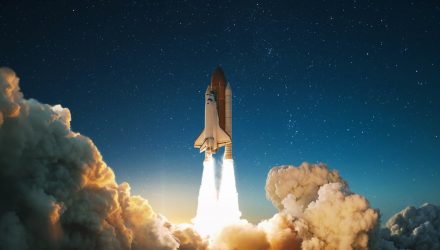 Home to $627 million in assets under management, the ARK Space Exploration and Innovation ETF (ARKX) is undoubtedly one of 2021’s most successful new exchange traded funds.

Making that number all the more impressive is the fact that ARKX is just five months old. With that success, however, has come some criticism asserting that ARKX isn’t as “spacey” as it should be. Those critiques increased after the fund liquidated its position in Virgin Galactic (SPCE) ahead of that company’s recent successful space flight, which sent the stock soaring.

“Another consideration for investors is how space-linked ETFs define their universe, and therefore their investments. The second largest holding in Wood’s Space Exploration and Innovation ETF (ARKX), for example, is the firm’s own 3D Printing ETF, and the fund also includes companies like Netflix and Deere, known for the tractors it manufactures,” reports Bernice Napach for ThinkAdvisor.

Concerns about ARKX’s lack of space tourism exposure and its large allocation to the ARK 3D Printing ETF (CBOE: PRNT) miss the mark. 3D printing is increasingly deployed and relevant in the aerospace and defense industry, which is a major driver of space advancements. As for space tourism, it’s catchy and investable, but it’s not the only concept investors should focus when it comes to space.

ARK founder Cathie Wood said as much in an interview with CNBC earlier this year. After all, space tourism, for as interesting as it is, is costly and available to limited number of people. Conversely, connected mobility, which depends on satellites, is a viable theme because it helps more people gain access to the internet, which is a potential plus for Netflix (NASDAQ:NFLX).

As for Deere (NYSE:DE), that company’s automation and technology depth is increasingly growing, and its ties to space include drones and weather satellites bringing improvements to the farming process. Upon closer examination, it’s not surprising that Deere, Netflix, and PRNT are on the ARKX roster. ARK makes it clear that enabling technology firms are part of the ARKX lineup and that there’s a case for those inclusions.