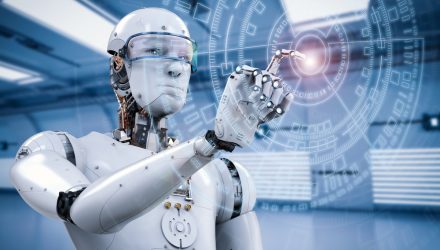 Rise of Robots Will Fuel This Innovative ETF

The ARK Autonomous Technology & Robotics ETF (CBOE: ARKQ) is often highlighted for being one of the ETFs with one of the largest weights to Tesla, but there’s much more to this disruptive ETF’s story.

A big weight to Tesla helps get eyeballs on the fund, but ARKQ is also one of the premier avenues for investors seeking exposure to the fast-growing robotics industry.

Robotics and artificial intelligence are making machines smarter and more capable than ever before, allowing robots to take on increasingly sophisticated tasks for faster and more accurate production. Declining computer chip costs and improving connectivity allows for virtually any object to connect to internet-enabled networks, effectively turning anything into a connected device.

“The demand for industrial robots has been on the rise in recent years as the manufacturing sector continues to grow in different parts of the world. Despite the installation of industrial robots being characterized by unique challenges, some regions are emerging as frontrunners in leveraging on the technology,” according to Buy Shares research.

Not surprisingly, the world’s largest economies are driving robotics adoption, a theme that could prove beneficial for long-term ARKQ investors.

“China, Japan, and the United States cumulatively control about 58.71% of the global industrial robot installations. As of September 2020, there were 381,000 units of industrial robots globally. China accounts for the largest share at 140,500 units, followed by Japan at 49,900 units. The U.S is third with 33,300 installed units,” notes Buy Shares.

“The rise in industrial robots is mainly fueled by manufacturers attempting to cut on production costs. Notably, the leading countries with high installation are some of the leading manufacturers in the automotive, electrical, and electronic, and pharmaceutical sectors. In general, the deployment of robots is key in cutting operational costs, reducing errors in the operational workflow, reducing material wastage,” according to Buy Shares.