You are at:Home»Disruptive Technology Channel»Pullback Could be Another Chance For Solar ETF to Shine 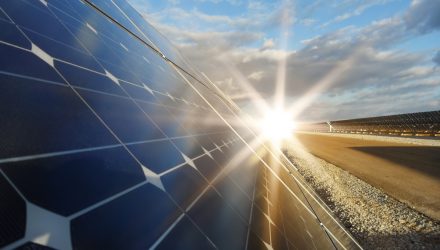 Pullback Could be Another Chance For Solar ETF to Shine

Chock full of Chinese equities, among others, and growth stocks, it’s not surprising that the Invesco Solar ETF (NYSEArca: TAN) endured some punishment last week, but the solar ETFs pullback could be an opportunity for investors to get involved in this high flier.

The scale is bolstering the solar investment and is one of the reasons why TAN has been one of the best-performing non-leveraged ETFs dating back to the start of 2019.

“Solar energy certainly has scaled. Installations are now approaching the magnitude of coal-, oil-, and natural gas-fired plants,” reports Josh Petri for Bloomberg. “Developers commissioned at least 35 projects of at least 200 megawatts worldwide last year, a record. With about 3,000 solar panels needed for each megawatt of capacity, a 200-megawatt project would be at least as big as 550 American football fields.”

Although the coronavirus-induced plunged sapped TAN last week, the ETF is still up more than 18% year-to-date and has an array of positive fundamental factors supporting it. Declining costs are a significant part of the rosy renewables outlook.

Europe is also a major catalyst when it comes to renewables adoption and damping out carbon.

“The European Union, in particular, has emerged as a leader in the fight against rising emissions, thanks to the concerted effort of a network of climate activists. European Commission President Ursula von der Leyen recently announced plans to make the bloc the first climate-neutral continent by 2050,” according to Bloomberg.

Roughly half of TAN’s 22 components are considered mid- and small-cap growth stocks, meaning the fund is ideally positioned to capitalize on equity market rally when the coronavirus situation is finally controlled.