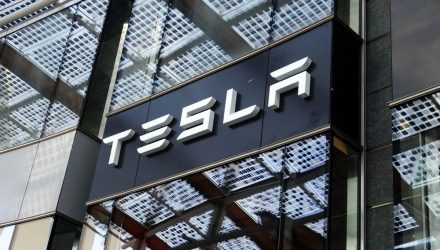 Pondering the Buyability of Tesla? Make the Safe Play with ARKQ

Some investors may be skittish about embracing the Tesla shares at current market levels.

That concern, though reasonable, can be buffered by using an exchange traded fund proxy for Tesla stock. The ARK Autonomous Technology & Robotics ETF (CBOE: ARKQ) is a strong idea to consider as an ETF with one of the largest allocations to the electric carmaker.

The actively managed ARKQ invests in companies that stand to benefit from the increased adoption and utilization of robotics and artificial intelligence (AI), including those involved with industrial robotics and automation, non-industrial robots, and autonomous vehicles.

ARKQ is one of several ARK ETFs highlighted as early advocates for Tesla (NASDAQ: TSLA) stocks. The case for Tesla upside remains strong because of continuous advancements in electric vehicles.

“Tesla is the global leader in designing and manufacturing battery electric vehicles, or BEVs, as well as a pioneer in developing solar power and large storage batteries. Tesla’s addressable markets have a strong tailwind from the secular shift from internal combustion engines to BEVs,” says Sekera.

While Tesla is undoubtedly richly valued, its growth trajectory is compelling as one of every five cars sold in 2030 is likely to be electric. Additionally, Tesla’s energy storage, which is often overlooked, brings its own strong growth prospects to the table, meaning there’s another avenue for ARKQ upside.

“In addition, we forecast that Tesla’s energy business will grow about 30% annually over the same time period,” concludes Sekera. “At this growth rate, the energy generation and storage business would grow from a little under $2 billion in sales to over $17 billion in 2029. As the company’s unit growth more than triples from our 2021 forecast to our 2029 forecast, we expect that fixed cost leverage and increased efficiencies will increase the firm’s operating margin from approximately 8.8% in our 2021 forecast to the low- to midteens over our forecast period.”