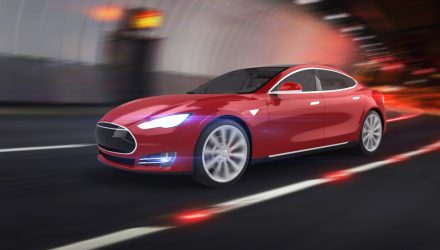 Massive Opportunity not yet Reflected in Tesla Stock, ETFs

ETFs with large Tesla exposure, a group including the high-flying ARK Autonomous Technology & Robotics ETF (CBOE: ARKQ), are undoubtedly benefiting from the electric vehicle’s maker surge this year, but believe it or not, there could be more to the story that isn’t yet fully reflected in Tesla stock.

It’s a longer-ranging thesis, but Tesla could eventually become the dominant name in ride-hailing, perhaps providing another catalyst for ARKQ along the way.

“Although it did not face many such questions on its earnings call this week, ARK believes that Tesla has strategic and tactical reasons to launch a ride-hailing service with human drivers before its robotaxi network launches next year,” writes ARK analyst Tasha Keeney in a recent note. “With a more competitive cost structure than Uber or Lyft, Tesla could enjoy a recurring revenue business model with software-like margins well above its current EV margin structure.”

Currently, electric vehicles represent a small percentage of new automobiles sold around the world and cars on the road, but that percentage is expected to increase in a big way over the next several years, but massive growth is coming for the industry. Increasing battery life and power is essential to converting more drivers to electric vehicles

Additionally, electric vehicles are viewed as the next frontier in ride-hailing because companies want to reduce emissions and drivers want to lower fuel costs. Moreover, Tesla, should it opt to challenge Uber and Lyft, could command premium pricing in some markets.

“Based on our research, Tesla could launch its ride-hailing service at a premium price of $4 per mile, slightly more than Uber‘s average price in New York City, and could lower prices over time to penetrate more price-sensitive markets,” according to Keeney. “ARK estimates that Tesla’s ride-hailing service could deliver roughly 50% EBITDA margins, a premium to Uber’s in cities it dominates and, that at a global scale and an average of $1 per mile, its addressable market would be roughly $50 billion.”

Ride-hailing could be a segue to Tesla’s broader autonomous vehicle ambitions.

“While ARK still believes that Tesla will be the market leader in autonomous driving, certainly in the US, if it were to launch a human-driven ride-hailing network, the bridge to autonomous would increase its margins and lower its risks considerably,” writes Keeney.