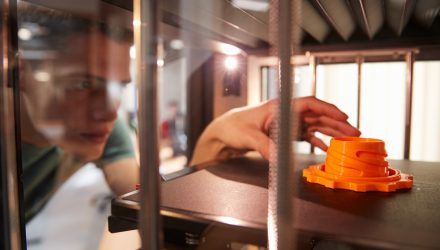 One of the first disruptive technologies to burst onto the scene a few years ago was 3D printing. These days, it feels like the concept has been forgotten, but risk-tolerant investors ought to consider revisiting the theme with the 3D Printing ETF (CBOE: PRNT).

PRNT debuted nearly three years ago as the first US-listed ETF dedicated to the 3D printing theme. The fund is one of two passively managed products from New York-based Ark Investment Management. ARK believes 3D printing will revolutionize manufacturing by collapsing the time between design and production, reducing costs, and enabling greater design complexity, accuracy and customization than traditional manufacturing.

“ARK believes 3D printing will revolutionize manufacturing, growing from $10 billion in 2018 to $97 billion in 2024 at an average annual rate of 65%,” according to the investment manager.

Pivotal to the PRNT thesis is the wide range of applications 3D printing has ranged from healthcare to industrial manufacturing and much, much more.

The previous 3D printing rally was largely fueled by retail investors. Today, that’s advantageous for two reasons. First, it means many PRNT components are likely under-owned by active growth managers that may be looking to boost their allocations to these names. Second, previously chastened retail investors may be willing to revisit the group and rather than a stock pick, they can turn to PRNT.

“3D printing companies have not recovered from the consumer-3D printing hype of 2013-2014. As they have entered the so-called ‘valley of despair,’ 3D printing stocks have suffered from a lack of interest, creating a mismatch between the valuation of public and private companies in the space,” according to ARK.