You are at:Home»Disruptive Technology Channel»Investing in the Potent Satellite Broadband Market 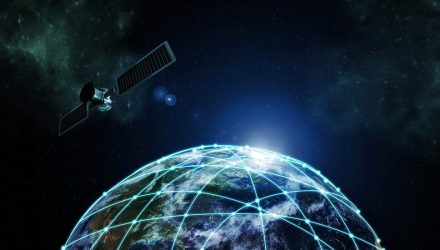 While those are undoubtedly captivating concepts, ARKX offers more tangible appeal in the form of exposure to providers of satellite broadband services – a complex market, but one that holds long-term potential for some ARKX holdings.

As ARK analyst Sam Korus points out, satellite broadband providers face several challenges, including bandwidth as a constraint on how many users a satellite system can adequately support, oversubscription scenarios, and costs consumers are willing to pay. For investors considering ARKX, the good news is that the satellite broadband market could be split into a pair of segments as it evolves.

“ARK’s research suggests that satellite broadband will evolve into two market segments, creating a global revenue opportunity of roughly $17 billion annually with a constellation of 12,000 satellites,” says Korus. “Ultimately SpaceX hopes to launch 42,000 satellites and the addressable market could grow to over $40 billion as bandwidth increases with more satellites.”

As an actively managed fund – a methodology that could prove particularly fruitful with space investing – ARKX isn’t constrained by an index, meaning it has some industry-level flexibility. Currently, the fund is positioned to capitalize on four space-related segments. That quartet includes orbital aerospace companies, where satellite firms reside.

Orbital aerospace firms “are companies that launch, make, service, or operate platforms in the orbital space, including satellites and launch vehicles,” according to the issuer.

Among publicly traded satellite broadband providers, Iridium (IRDM) is the fourth-largest holding in ARKX at a weight of 6.13%. Other companies with robust satellite industry exposure include Trimble (TRMB), which is ARKX’s largest holding at 9.23%. Aerospace and defense contractors, several of which reside on the ARKX roster, also have satellite exposure.

“We believe one customer segment will pay roughly $75-$100 per month, and another $10-$20 per month,” said Korus. “Early adopters will be at the high end of the market, giving SpaceX the opportunity to drive costs down the satellite broadband learning curve and setting it up to tap into the low end of the market.”